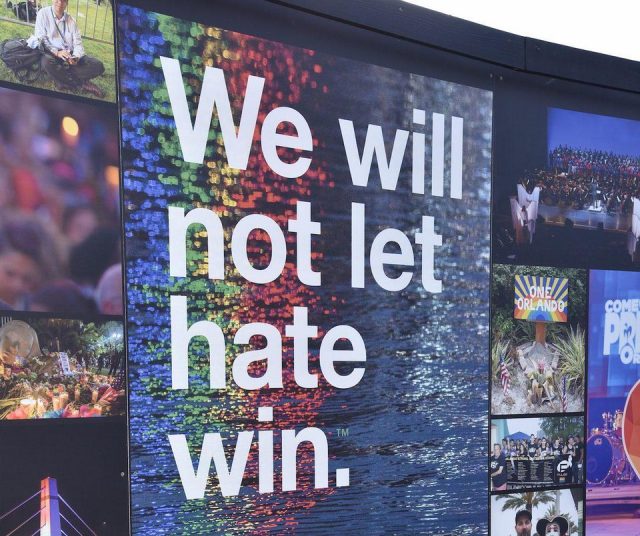 Florida lawmakers are aiming to make the site of the Pulse nightclub shooting in Orlando a federally recognised memorial, three years after the deadly massacre took place.

A total of 49 people were killed and 53 people were injured at the LGBT+ nightclub on June 12, 2016, in one of the deadliest mass shootings in American history.

Pulse owner Barbara Poma has since established onePULSE foundation, a nonprofit organisation with the mission of creating “a sanctuary of hope and education around the tragedy.” To honour both victims and survivors, Poma opened the site as a temporary memorial in 2018, naming it The Pulse Interim Memorial.

It features a wall of photos showing the world’s emotional response to the tragedy as well as an offering wall where people can leave flowers or mementos of their support. The original Pulse Nightclub sign remains and there are green spaces with benches for quiet reflection.

On Monday (June 10), Democratic congressional representatives Stephanie Murphy and Darren Soto announced a bill requesting federal funds to make the site a national memorial. Federal recognition of the Pulse nightclub site would mean the memorial would be able to collect public or private grants and receive government protection.

The announcement was made in a press conference held at the old nightclub. Poma agreed that it was “an important step in honouring those who were taken.”

“The Pulse tragedy shook our community to its core and forever changed us,” said Murphy in a statement.

“It’s important we remember the love that the 49 victims and their loved ones brought into this world, which will always be stronger than the hate that stole their lives on that day. By designating the site as a National Memorial, we will honour their memories, be inspired by their legacies, and recognise the positive contributions the LGBTQ community offers to the world.”

In contrast, Republican governor Ron DeSantis was recently accused of “straight-washing” after his remembrance proclamation on the eve of the massacre’s third anniversary failed to mention the LGBT+ community.

“@GovRonDeSantis has stripped any mention of the #LGBTQ community in remembering #Pulse. This is completely straight-washed and an insult to #HD47,” Florida state representative Anna Eskamani wrote on Twitter.

<p dir=«ltr» lang=«en» xml:lang=«en»>@GovRonDeSantis has stripped any mention of the #LGBTQ community in remembering #Pulse. This is completely straight-washed and an insult to #HD47.

Based on these side-by-side Pulse proclamations, Governor Rick Scott was a better friend to LGBTQ Floridians than DeSantis. pic.twitter.com/2nvUE343XG