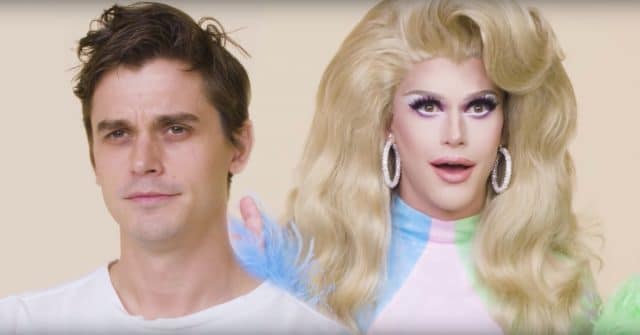 Queer Eye star Antoni Porowski took a break from the kitchen for a special Pride edition of Drag Me, a YouTube show which sees celebrities transformed into drag queens.

Porowski was given a dramatic makeover by drag queen Miz Cracker, best known for her hilarious appearance on Season 10 of RuPaul’s Drag Race where she finished fifth.

While Miz Cracker applied his makeup, Porowski spoke of his fluid sexual identity, and how he was wrongly assumed to be gay whenQueer Eye started filming.

“It was a little intimidating when we started filming because it was just assumed that I was gay, even though that was never discussed during the chemistry testing in the whole audition process,” he said.

Porowski, who has openly dated men and women, chose to reveal his sexuality in Season 1, Episode 4 of the show in a discussion with a gay man who was not yet out to his family.

He said:  “I started sharing that I’d been in a relationship with a guy and then back to women again, and I think some of the producers were kind of surprised.

“By referring to myself as gay, I felt that in some way I wasn’t honouring my [previous] relationships and the real love that I’d had for the women I’d been in relationships with.

“So I think the word that I’m most comfortable is fluid, and it’s so shocking to me how that surprises people. Call yourself whatever the hell you want to refer to yourself as! It’s not something that should be judged or questioned, but embraced.”

After his makeup was complete, Porowski donned a feathered turtle-neck dress, blonde wig and heels to become his stunning alter-ego, Eva Cado, named for the chef’s love of avocados.

Seeing himself in the mirror for the first time, he said: “My feminine side is something that’s always been internal … and to see those stereotypical things come up on the outside and my outward appearance, it feels very naked.”

He later added on Instagram: “Thank you @them, @miz_cracker and @christiancowan for providing a safe space where I could explore and learn about a side of me I kept deep inside.”

Miz Cracker said: “You are a person that’s used to doing things with an egg timer, everything’s very regimented, I wanted to get you out of that.”