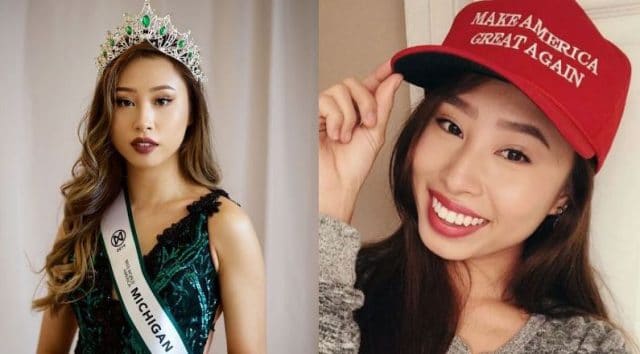 The Miss World America organization has stripped a fervent Trump-supporting model of her Miss Michigan 2019 title over “racist, Islamophobic, and insensitive” social media posts, with one such tweet saying: “The majority of black deaths are caused by other blacks.”

Kathy Zhu, 20, is a University of Michigan student who won the 2019 Michigan World America title on Sunday.

However, her reign was cut short after organizers became aware of Zhu’s controversial Twitter posts.

Zhu tweeted Thursday what appeared to be a screenshot of an email she received from Miss World America officials, who told her she was dismissed from being a pageant participant.

“Miss World America’s State/National/Chief Director accused me of being racist, Islamaphobic, and insensitive,” Zhu tweeted. “They stripped me of my Miss Michigan title due to my refusal to try on a hijab in 2018, my tweet about black on black gun violence, and ‘insensitive’ statistical tweets.”

The Detroit Free Press reports that Zhu replied to a Twitter user in a comment saying: “Did you know the majority of black deaths are caused by other blacks? Fix problems within your own community before blaming others.”

Zhu insists that she “stand by each and every one of my tweets on my account” and claims her racism is just a “difference of opinions.”

“It is honestly sad that the left refers to statistics and facts as racist and insensitive,” she says.

In a statement to the media, Zhu, who identifies as heterosexual, claims that “coming out as a conservative is way harder than coming out as gay in today’s society.”

“I am very glad that I now have the opportunity to speak out about the unjust treatment of conservatives,” the statement continues. “People support that I’ve decided to stand my ground instead of compromise on my beliefs and values.”