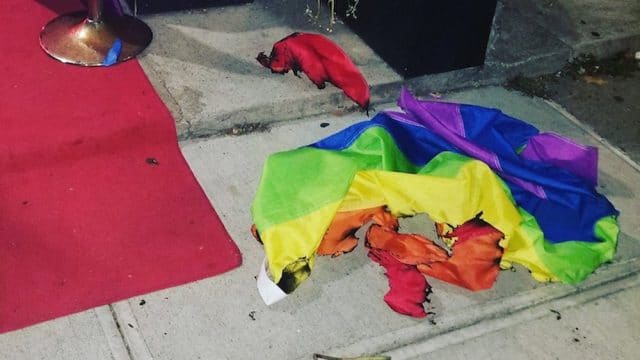 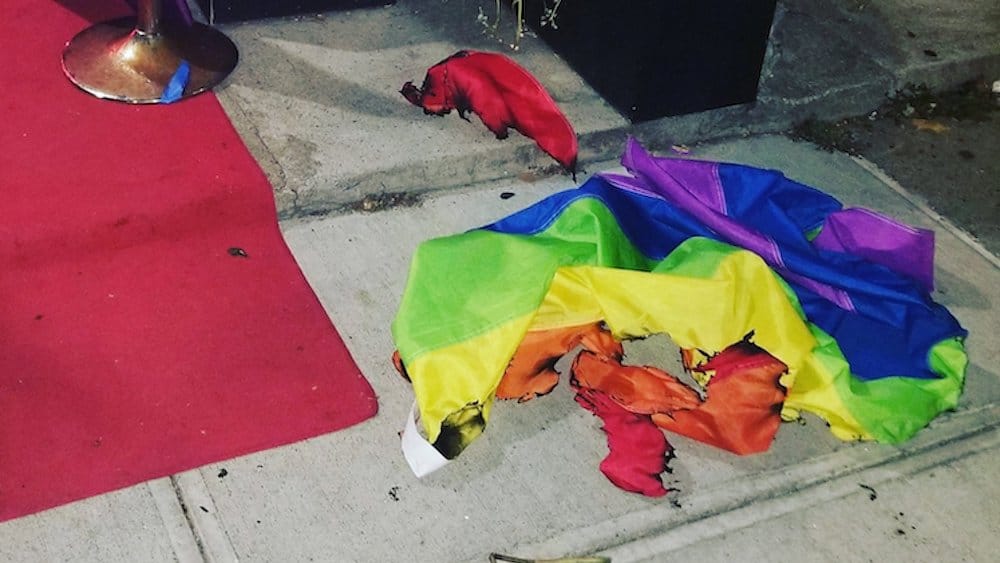 A burnt rainbow flag outside of the Alibi Lounge in Harlem

For the second time in nearly a month, someone has burned the rainbow flag outside of New York City’s only black-owned gay bar, the Alibi Lounge in Harlem.

Between 12:20 and 12:45 a.m. early Monday morning, someone set fire to a rainbow flag hanging from a velvet rope outside of the bar’s front entrance.

Previous to this, on May 31, surveillance cameras captured the sneakers of a person who walked up to the flags hanging outside the bar’s downstair entrance. The person knelt down, set fire to the flags and then walked off. Moments later, a woman notified the bar that their flags were aflame and two employees extinguished the flames.

The bar’s owner Alexi Minko says, “I have to say that what I find odd was the timing of both events. One was at the beginning of Pride and one was right at the end. One has to wonder if there’s a kind of message they’re trying to send.”

Unlike the first incident, neither employees nor cameras captured the person involved.

Here is footage of the first flag being burned:

But the vandalism is all the more concerning considering that Minko had to remove the flags during the July 4th holiday because people “were intentionally setting off firecrackers” at the front door, according to Edge Media.

Police were already investigating the first flag burning as a potential hate crime and had increased patrols around the bar, but so far no one has reportedly been arrested as a suspect. Minko says the bar is usually slow on Sunday nights before the most recent attack happened.

At the time of the first flag burning, Minko told ABC 7, “It was a crime, a deliberate criminal act. You know you feel violated. No one was hurt but emotionally you really start to wonder. You start questioning yourself… What’s the reason behind it? What is happening? And you start to worry a little bit about what it means. Is there a message that somebody’s trying to send to us? So it’s a mix of emotions.”