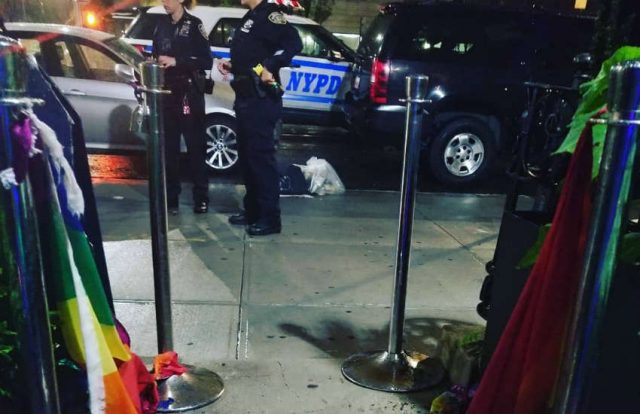 Police are investigating after someone set fire to rainbow flags at the entrance to a gay bar in Harlem.

The attack occurred at 1am on Friday 31 May at the Alibi Lounge in New York City. The bar says it is the only black-owned gay lounge in the city.

This comes just hours before the beginning of Pride Month celebrations in the US.

Alibi posted the flags on Instagram: ‘Few minutes ago, someone set our rainbow flags on fire! To the homophobic coward, we will make our mission to find you! It’s #pridemonth motherfucker!’

They added in another post: ‘Thanks to [New York Police Department] for doing a great job standing under the rain to help find the a$$hole who set our rainbow flags on fire! The symbol of our pride of being part of the LGBTQ community!

The owner of the bar, Alexi Minko, told that he and other employees ran out to put out the flames.

Minko said: ‘It becomes obvious it was a crime, a deliberate criminal act.

‘You know you feel violated. N one was hurt but emotionally you start to wonder. You start questioning yourself, you start wondering is it us?’

He added: ‘What’s the reason behind it? what is happening? And you start to worry a little bit about what it means. Is there a message that somebody’s trying to send to us? So it’s a mix of emotions.’

The NYPD’s Hate Crimes task force is investigating the fire. They suspect it is a homophobic hate crime. Police are currently standing guard at the bar.

The owner has kept the burned flags up at the front of the bar. He wants to show the attackers that he is not scared.