Home Gay Life Read how this closeted high school senior got up the courage to... 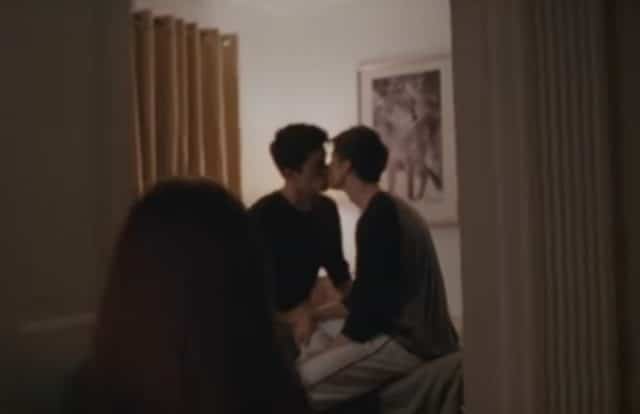 This real life story is guaranteed to brighten your day

Bravery takes all forms, and courage is especially hard when you’re in high school.

One closeted student in his senior year looked to someone he knew, an out guy, as an example of the kind of courage he admired.

And it helps that he was in love with him as well.

Asking for advice on Reddit, he first wanted to know how he could approach his gay friend Joe on coming out and maybe even asking him for a date. The problem was, when he did it, he didn’t make it clear whether he was interested in Joe.

‘Closeted high school senior here! I’m still working on finding the right time to come out. Even though I think most people will be fine, I’m still scared about a few and what they might think of me. So as far as most people think, I’m straight. I generally act like a straight guy, and no one has ever suspected me of being gay (at least not to my face),’ he said.

‘There’s another boy at school who’s openly gay, and I’ll call him Joe. He came out at the beginning of high school, and I’ve kinda had a crush on him for the past couple years. I really admire him for being able to come out, and he’s a really genuinely sweet guy and super fun to be around.

‘My friend group kinda merged with his this past year, so we’ve started talking more and hanging out with groups of people. It’s been great being able to spend time with him, but we’re never alone together, and don’t hang out one-on-one.

‘I’ve been super nervous about it, but I decided that I need to summon the courage to ask him out. I chickened out every time I saw him for like a week straight. Every time I’d have a chance to talk to him alone, I’d get butterflies in my stomach, then inevitably someone else would show up and I’d feel like I couldn’t do it any more.

‘Finally, yesterday I caught him alone at his locker at the end of the day. I was so nervous, but asked him if he wanted to come chill at my place sometime this week. He said that would be cool, and asked if I was having a few people over from our friend group.

‘I kinda stuttered, but said no, and said that I just thought it would be cool to hang out because I don’t think I’ve ever had him over before. He kinda just said, “Umm ok,” and that was that.

‘I was so excited! He said yes! Err– he said ok! But my problem is that the more I think about it, I think I really just asked him to hang out the same way I’d ask a friend I wasn’t interested in romantically. I’m afraid that he is just gonna think I’m some boring dude and won’t be interested in me. I really want to come out to him and tell him I have a crush on him, but I feel like I kinda asked him out in an awkward way. I wanted to play it cool and let on to the fact that I was asking him on a date without directly saying it.’

A few days passed, and everyone on Reddit was clamoring for an update.

It turns out, it went very, very well. This high school senior proved he was capable of the same kind of bravery.

‘Joe and I didn’t talk much at school between the day I asked him and Friday when we hung out. I didn’t really see him in the halls or at lunch or anything. I was getting kinda worried, afraid that maybe he forgot, or wasn’t interested, or didn’t care, but then on Thursday at the end of the day, he came all the way to my locker and asked if we were still good for tomorrow. I said, “Yeah,” and then he smiled a super cute smile and said, “Great,” and then I smiled, and felt like he’d pretty much figured it out. But I still wasn’t sure, and was still super nervous about telling him,’ the Reddit user said.

‘When I went home that day, I was practically shaking I was so nervous. I just kept thinking about how I’d finally be doing it tomorrow–I’d finally be able to come out. I couldn’t do any homework or really focus on anything. I spent a lot of the day wandering around in the kitchen not eating anything, but just looking out the windows and breathing nervously. When my brother (14 M) got home, he asked me if everything was okay. We don’t talk about feelings much or have heart-to-hearts, but we’re still close and get along great. I told him I was fine, just had a lot of stuff on my mind. I started thinking that maybe I’d tell him.

‘Later that night, I was still too nervous to focus or really do anything, but had been running through the possibility of coming out to my brother. He was in his room playing video games. I went in and asked if I could join in. As we were playing, he asked me again if I was okay. Again, I said I was fine. We were quiet for a little, then he said, “Come on you’ve been acting like a zombie all day. Did something happen?” I said, then started to stammer a little and said, “I umm… I just… umm…” and started breathing heavy, because I thought I might tell him right then.

‘But before I could, I just started crying. I don’t know where it came from, but it was like the floodgates opened and I was bawling. He came over and gave me a hug and started getting scared and kept asking, “What’s wrong? What happened to you? Are you okay?” I kept choking out between sobs that I was fine, that nothing happened, and that I was okay. Finally, after getting out a lot of tears, I took a deep breath, and said the words I didn’t know I’d ever say. I said, “I’m gay.”

‘My brother was the best brother ever. He told me he was so happy that I would tell him. He said he completely supports me and doesn’t think any different of me. He said he’s sorry that it was hard for me to say anything, and that he wished he could have been nicer or made it more obvious that he’d always have my back no matter what.

‘I kept crying and thanked him and said he was the best. He cried a little too. I couldn’t believe how good I felt. It was like this enormous weight was lifted off my chest. I felt like a completely different person– like I was finally truly me. I went to sleep that night feeling so relieved, and like there was less pressure for me with Joe. I’d already gotten the first coming out over with.

‘At school, the butterflies managed to flutter back into me as I went through the day. I didn’t hear a word any of my teachers said because all I could think about was talking with Joe at the end of the day. When the last bell rang and I walked to my locker, Joe was there waiting for me. We made some small talk at my locker as I packed up my bag, then walked out together.
‘We went into the student parking lot and got into my car, and right after we closed the doors, he asked me kinda casually if there was any chance that I thought I might like guys. I felt myself smile the biggest smile I’d ever smiled, and just asked, “How’d you know?”

‘He smiled back and said, “I didn’t know. Just hoped.” And I melted. I couldn’t believe what was happening! I was speechless, and he just grabbed my hand to hold it as we sat in the car. I had to let go so I could start the car and back out and everything, which was kind of awkward, but then we held hands the whole drive to my house. When we got there, we mostly just talked about what it’s been like being gay, stories about coming out, and got really close. We kissed, which was another amazing dose of amazing on top of my awesome week!’