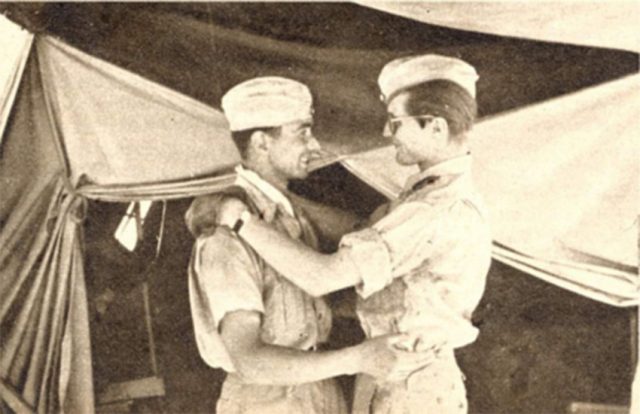 This letter is guaranteed to tug on your heartstrings

Gay love has existed in all forms for all of time, and this is one beautiful real life story from World War 2.

American soldier Brian Keith sent a letter to Dave, a fellow soldier he met and fell in love with in 1943 while stationed in North Africa.

It was penned on the occasion of their anniversary.
The letter was reprinted in September 961 by ONE Magazine, a groundbreaking gay magazine first published in 1953. The original letter is held by the Library of Congress.

It even inspired a song on British band Goldfrapp’s album Tales of Us, called Clay.

Check out the letter, as well as the track, below:
Dear Dave,

This is in memory of an anniversary — the anniversary of October 27th, 1943, when I first heard you singing in North Africa. That song brings memories of the happiest times I’ve ever known.

Memories of a GI show troop — curtains made from barrage balloons — spotlights made from cocoa cans — rehearsals that ran late into the evenings — and a handsome boy with a wonderful tenor voice. Opening night at a theatre in Canastel — perhaps a bit too much muscatel, and someone who understood. Exciting days playing in the beautiful and stately Municipal Opera House in Oran — a misunderstanding — an understanding in the wings just before opening chorus.

Drinks at “Coq d’or” — dinner at the “Auberge” — a ring and promise given. The show 1st Armoured — muscatel, scotch, wine — someone who had to be carried from the truck and put to bed in his tent. A night of pouring rain and two very soaked GIs beneath a solitary tree on an African plain. A borrowed French convertible — a warm sulphur spring, the cool Mediterranean, and a picnic of “rations” and hot cokes. Two lieutenants who were smart enough to know the score, but not smart enough to realize that we wanted to be alone. A screwball piano player — competition — miserable days and lonely nights. The cold, windy night we crawled through the window of a GI theatre and fell asleep on a cot backstage, locked in each other’s arms — the shock when we awoke and realized that miraculously we hadn’t been discovered. A fast drive to a cliff above the sea — pictures taken, and a stop amid the purple grapes and cool leaves of a vineyard.

The happiness when told we were going home — and the misery when we learned that we would not be going together. Fond goodbyes on a secluded beach beneath the star-studded velvet of an African night, and the tears that would not be stopped as I stood atop the sea-wall and watched your convoy disappear over the horizon.

We vowed we’d be together again “back home,” but fate knew better — you never got there. And so, Dave, I hope that where ever you are these memories are as precious to you as they are to me.