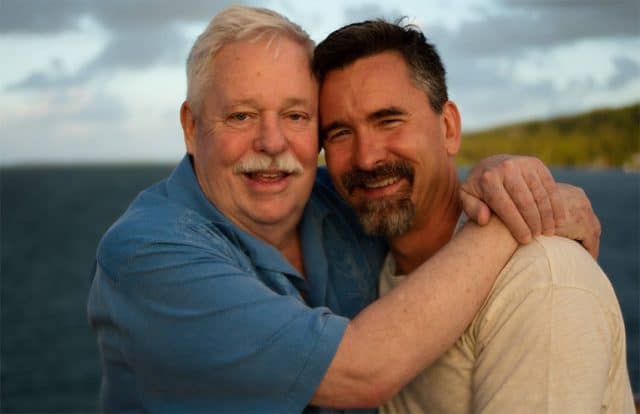 Christopher Turner is husband of author Armistead Maupin. He says he can no longer overlook his step-mom’s beliefs on same-sex marriage

A letter by San Francisco-based photographer Christopher Turner, the husband of acclaimed author Armistead Maupin, is going viral on Facebook.

Within it, Turner takes his stepmom to task on her beliefs and attitudes around LGBTI rights and same-sex marriage.
We’re re-printing it below:

‘You’re on the wrong side of history’

‘I recently discovered that my step mother who prides herself on being a conservative Catholic and a Trump supporter posted some homophobic things on her Facebook page.

‘One of them was a rant about how every child deserves a mother and a father and the other was a decidedly crazy article against gay marriage. She’s always been more than nice to my face as well as to Armistead. We’ve seen her on two recent occasions where she acted like we were great friends. Here’s my letter to her:

‘Faith does not tell people of different races they can’t marry. That’s hatred.

‘Faith doesn’t tell a little child in an orphanage who hasn’t been adopted that she will never have parents, because the same-sex couple who wants to love her and give her a good life is not good enough. That’s hatred.

‘If we were speaking 50 year ago, and I had an African American wife, you would be preaching anti-miscegenation under the guise of faith. Would you just expect me to stand by and understand your racist beliefs?

‘When you began the affair with my father, and took him away from my mother and his 3 year old daughter, did you believe that little girl deserved a mother and a father?

‘I accepted you because I realized you were better for my father than my mother was. My parents just weren’t good together. I never thought what you did was right, but I’ve accepted you and your relationship nonetheless.

‘Now that you’ve let your true beliefs be known, I’m no longer going to put up any pretense that we love and accept each other. You’ve shown that your “love” was just a social formality.

‘If you ever let go of the hatred you’ve been taught, I’m here. In the meantime, I’m not willing to be anybody’s second-class citizen. I’m not ashamed of myself, but maybe you should be of yourself.

‘I’ll continue fighting for my rights and for love in the world… and against the hatred that you’ve been taught.

‘I know that you didn’t invent this kind of hatred, but it makes me heartsick that you’ve known me for thirty years and can’t accept that I deserve the dignity and the rights of any other human: To love whom I truly love and to have that love recognized and acknowledged by my society and by my government.

‘Confronting you doesn’t make me feel good, or proud, or self-righteous’

‘I had a psychology teacher in college tell my class once to believe what people tell you about themselves. If someone says “I’m a nice person”, believe it. If someone tells you they are not nice, believe that too. I should have believed you years ago when you started calling yourself “Wicked Step Mother”.

‘Confronting you doesn’t make me feel good, or proud, or self-righteous. It just makes me feel sad that someone that I thought I knew well is actively fighting against my rights. I know our politics are on different ends of the spectrum, but seeing you publicly fighting against my personal rights truly hurts.

‘By the way, there are members of our family that are afraid to come out to you for good reason. One is a teenager who’s very vulnerable. LGBTQ teens are 3 times more likely to commit suicide than straight teens.

‘I hope he has the strength to look past people like you. I want him to realize that he is a better person than anyone preaching against him and that he is perfect just the way he is. I can’t say the same about you, knowing what I know now about the darkness in your heart.

‘A good son… and thankfully not yours.’

‘Life’s too short to put up with hate’ GSN asked Christopher Turner if he’d received any response.

‘I haven’t received a response from them and don’t expect to,’ he said. ‘There’s a bit of a longer story about my reaching out to her to bridge the gap before I decided to write this letter. I don’t think I’ll be hearing from her again which is just fine with me.’

He said that the day had been emotional for him, but that he was proud of the letter and had been ‘surprised’ at the response and how it was resonating with others.

After seeing the posting being widely shared, and receiving many messages of support, he added another message to clarify that he had made attempts previously to engage with his step-mom.

‘I never expected to get much response to such a long post. Thanks for the love and feedback from everyone.

‘In the interest of not making my post even longer, I left out a little bit of the story. When I first saw the posts from my stepmother I reached out to her to try to bridge the gap before I burned any bridges. I basically said I’d love to talk with her about the human rights that come with marriage. Hospital visitation rights, etc.

‘After months of silence and finally a face-to-face confrontation about her silence I finally got a nasty letter from her that I read yesterday.

‘It basically said that because I don’t support Trump I didn’t deserve a conversation with her about her homophobia. That’s when I decided to let this letter be born. I appreciate my loving friends and family so much. Life’s too short to put up with hate.’