Home Gay Life Read why this gay man froze and stared when he saw two... 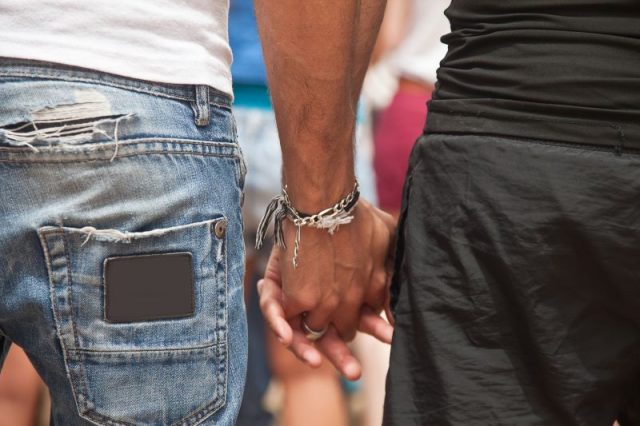 ‘I am 50 years old, gay, married, living in New York City in 2016 and still this sight, of two men or women holding hands in public, it brings me up short every single time’.

Sometimes it’s the smallest gestures that can have the biggest impact.

GSN, along with many others, was touched by this Facebook posting last week by New York city resident Peter Spears.

Spears, an independent film producer who lives in midtown Manhattan, was taking the New York subway when he was stuck by the sight of two men holding hands. Many would say that such a sight shouldn’t prompt surprise these days – but we all know that two men openly holding hands is not an everyday sight in some places: many of us still check our behavior when in public.

‘So I am racing for the subway, late to meet my husband for a dinner downtown, pushing past rush hour commuters when I notice out of the corner of my eye two guys holding hands on the platform. And I stop dead in my tracks.

‘Truly, it’s an involuntary response. And I stare. I do. I have to admit I stare, unabashedly, and just keep looking, almost as if I can’t believe my eyes and then as though I am trying to memorize this sight and unwilling to look away, even when the train arrives.

‘I am 50 years old, gay, married, living in New York City in 2016 and still this sight, of two men or women holding hands in public, it brings me up short every single time.

‘At first something constricts inside my chest and I find I am nervous for them. Part of my stopping and staring is to make sure they are safe. Is this lovely scene going to go horribly wrong at any moment and they might need help? But mostly I am awed by their courage. And goddamnit, why should it take courage to express their love openly?

‘Well, sadly, we all know too well why, but still there it is.

‘A simple act of love. And the whole world stops for a moment, or two or three and I keep staring. Trying, perhaps, to rewire the synapses in my brain to see this hand holding as perfectly normal, in essence to not notice this at all one day, as I never really notice straight couples holding hands, husbands and wives, parents and children, young couples or elderly ones.

‘For the rest of the world, it just happens, a basic part of everyday life. Ah, well. Someday. But for today, if you are gay and holding hands with your partner and I walk by, forgive my staring but know that someone loves you for the bravery of your love and thanks you for teaching all of us, by the smallest of gestures about the greatest gift of all.#loveisloveislove’

The posting was universally liked.

‘I mistakenly thought that in the City this expression was of no consequence,’ said one commentator. ‘It is always nice to be moved by strangers’ expressions of love. Let’s hope that for our kids, that is all that two boys holding hands means, just that. Nothing more and nothing less than love.’

Another pointed out, ‘holding hands between two women or two men used to be acceptable as friendship, too. People should be able to hold hands with whomever they choose for whatever reasons of affection they want! Culture is now so jaded and limiting.’

Others also said that adults in general don’t hold hands enough, whereas it comes as second nature to children.

‘Children do it without thinking. It’s only as we grow up that mores are learned from others and can take a long time to change.’

In a statement to GSN, Spears said: ‘I was a bit overwhelmed by the response but it is heartening to know that amidst a sea of political posts and pet videos on social media, love still has the power to move so many people.’