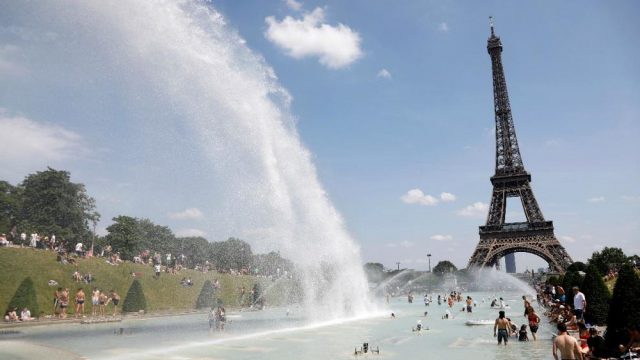 Temperature records are expected to be broken in Europe this week as a heat wave sweeps across the bloc.

In France, record highs of 45 Celsius in the southern towns of Nimes and Carpentras are expected on Friday, beating the previous June high of 41.5 Celsius in 2003. The highest ever temperature recorded in France was in August 2003, at 44.1 Celsius.

Across the continent, temperatures are predicted to reach between 35 and 40 degrees Celsius in most of France and Italy, potentially reaching 40 degrees in northern Spain. Models show temperatures much higher than average in Germany, Poland and the Czech Republic.

Temperatures for June are certainly reaching a peak, but is it too early for this?

According to Jonny Day from the European Centre for Medium-range Weather Forecasts (ECMWF), this is not the first example of such a phenomenon.

“In terms of the time of year and spatial pattern of warmth, the ongoing event in Europe is quite similar to the 2015 European heatwave, which most severely affected southern and central Europe, and which set the all-time temperature records for Germany and Switzerland” Day said, adding that we will need to wait until after the peak of this event to really know how severe it has been.

Over this week, Europeans will be sweltering as temperatures reach between 35 and 40 degrees Celsius in most of France and Italy, potentially reaching 40 degrees in northern Spain. Models show temperatures much higher than average in Germany, Poland and the Czech Republic.

A hot air mass rising from North Africa will cause temperatures to soar.

Temperatures already rose on Monday and this will continue through to Friday with the risk of a heatwave for much of the week.

Europe is being swept by strong, hot winds from Africa which are also bringing a high concentration of small particles PM2.5 which stay in the air for a long time as they are so light.

According to a study by the American Heart Association, “exposure to PM(2.5) over a few hours to weeks can trigger cardiovascular disease-related mortality and nonfatal events; longer-term exposure (eg, a few years) increases the risk for cardiovascular mortality to an even greater extent than exposures over a few days and reduces life expectancy within more highly exposed segments of the population by several months to a few year.”

It can be especially risky for older people and children.

“Even though it will be short-lived, this heatwave could be remarkable for its momentum and intensity,” Météo France said.

Meteorologists warned earlier this month that heatwaves could be a trend for summer in Europe this year due to high-pressure systems.

“The most recent seasonal prediction favours above-average temperatures over much of Europe, for the period July to September as a whole. While the seasonal average is not a perfect indicator of the risk of heatwaves (or of severity of any such events), over Europe there is a direct correlation: seasons which include more heatwaves than usual are likely to record above-average seasonal means.”

The areas indicated as most at risk by this forecast are southwest Europe and the extreme eastern part of the continent.

According to the European Environment Agency, 2018 was among the three warmest years on record in Europe.

Euronews spoke to Dr Dim Como, an expert on Climate Change and Extreme Weather at Amsterdam University, said that “due to simple warming, due to global warming these type of heat extremes are much more likely. So if you have the circulation that can bring heatwaves then heatwaves will be much more intense.”

Watch and listen to Dr Dim Como by clicking on the player above.