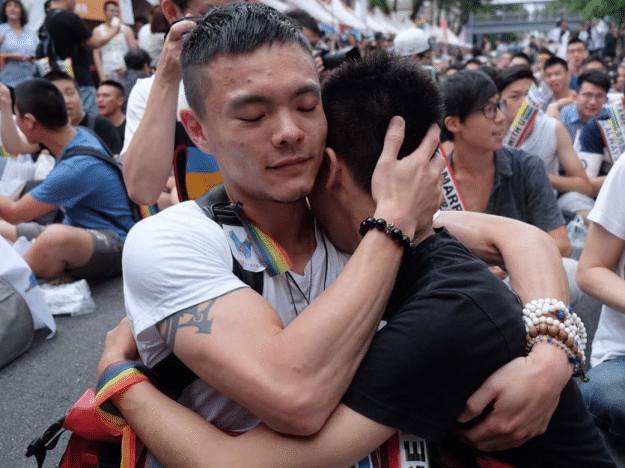 Late last year, Bermuda became the first country to take away gay marriage after only just legalizing it in the country. That has now set a terrible precedent where a country has taken back the right for same-sex couples to get married.

Now, it seems that Taiwan is in a battle of its own to maintain its gay marriage rights.

Several religious groups have banned together to start an appeal of the court ruling that legalized same-sex marriage in the country.

Taiwan became the first Asian country to legalize marriage equality after the Constitutional Court ruled that it was discriminatory to prohibit same-sex couples from marrying. It then ordered Taiwan’s parliament to change the law to support marriage equality by 2019.

Unfortunately, the law hasn’t been changed yet, and now religious groups are fighting to keep it that way.

According to the Taipei Times, the Alliance of Taiwan Religious Groups for the Protection of the Family submitted a petition to the Constitutional Court yesterday (February 14) while protestors stood outside.

Chang Shou-yi, the leader of the Alliance, said the petition was being submitted because they believe the original ruling was unlawful.

“The interpretation and the reasons given by the Council of Grand Justices in its ruling contravene articles of the Constitution,” he told the Taipei Times.

“Therefore, we ask the High Administrative Court judges to have the conscience and moral integrity to rule on our appeal through their own independent stance, and not to cave in to political influence and forces of intimidation, and to reach a decision conforming to the freedoms and values of our democratic society.”

On top of all that, the Alliance has also submitted a petition to the Central Election Commission to hold a referendum on the topic.

Do you agree that the government should keep the current definition of marriage as between a man and a woman and pass a separate law to protect the right of a same-sex couple to live together,’” The referendum petition asks.

If the Election Commission approves the proposal, the Alliance will need an additional 281,745 signatures to become a formal referendum.

Unfortunately, they may just get those signatures.

As we reported last year, the public opinion on the ruling was almost split down the middle right before the Constitutional Court decided. As such, there are still many people displeased with the decision that was made.

We’ll keep you updated as the situation in Taiwan progresses.