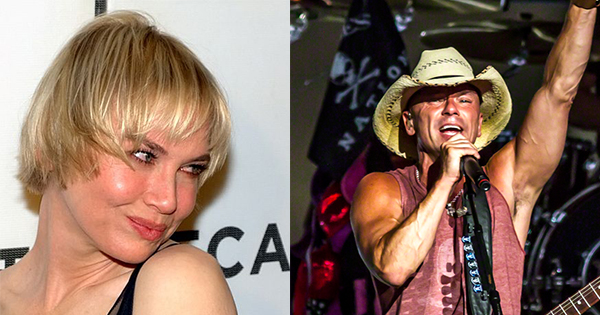 During Renée Zellweger‘s recent sit down with The Advocate to talk about her new movie “Bridget Jones’s Baby,” the subject of those old gay rumors about ex-husband Kenny Chesney came up.

Zellweger and Chesney married in 2005. Zellweger cited “fraud” as the reason for having the marriage annulled after just four months, spurring speculation and rumors that Chesney might be gay.

“I forgot about that. It’s a pretty big thing to forget, isn’t it?” Zellweger said when asked about the rumors. “That made me sad. It made me sad that somehow people were using that as a way to be cruel and calling someone gay as a pejorative, which has fateful consequences. Of course, there’s the bigger-picture problem of why anyone had to make up a story at all.”

So did she feel pulled to rush to his defense?“Well, I’d said all I needed to say on that subject,” she said. “I’m an old-fashioned gal who doesn’t feel it’s appropriate to hang out your laundry on the lawn. I feel you devalue yourself as a human being when you share very personal things with a bajillion strangers who are making fun of you. I just don’t see that there’s any dignity in that. But sometimes it is difficult to just let something be what it is, especially when it’s unnecessary ugliness. Once you’ve said your piece, shouldn’t that be enough? And why is the ugliness that’s perpetuated in the media so attractive to people?”

Chesney commented on the rumors in an interview with Playboy in 2009.

“What guy who loves girls wouldn’t be angry about that? I didn’t sign up for that,” he said. “I think people need to live their lives the way they want to, but I’m pretty confident in the fact that I love girls (laughs). I’ve got a long line of girls who could testify that I am not gay.”

Zellweger also talks gay best friends, both on and off screen, playing with lesbian subtext in “Cold Mountain,” and her connection to the LGBTQ community in the interview, which you can read in full here.