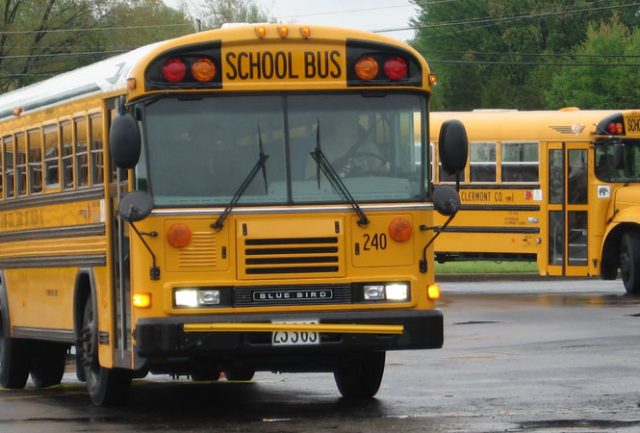 The lengthy report from Human Rights Watch was based on interviews primarily with current and former high school students, parents, administrators and teachers in Alabama, Pennsylvania, South Dakota, Texas and Utah. It documented several challenges lesbian, gay, bisexual or transgender students face, including in-person and online bullying, limits on LGBT student groups, exclusion of some topics from curricula and discrimination by classmates and school personnel.

“In every state we visited, we heard stories of students who were insulted, cyber-bullied or attacked, and teachers who allowed discrimination and harassment because they see it as normal behavior,” said Ryan Thoreson, a fellow in the nonprofit’s LGBT Rights Program.

Thirty-one states, including the five in the report, have not enacted laws to specifically protect against bullying on the basis of sexual orientation or gender identity, according to the report. While some districts and schools in Alabama, Pennsylvania, Texas and Utah have worked on comprehensive bullying policies, administrators in South Dakota cannot because of a state law that prohibits school districts from naming any protected classes of students in such policies.

“This makes it much more difficult for teachers to know how to intervene when they see that bullying happening, (and) for students to know that’s off-limits, that’s not OK,” Thoreson said. “Only South Dakota and Missouri have laws … that prohibit school districts from putting their own protections.”

The report includes policy recommendations at the state level to make schools more inclusive, but the proposals will almost certainly face resistance from Republican-controlled legislatures in states like Texas and South Dakota, which have approved measures that allow discrimination against transgender students.

“I do not accept the bifurcation of gender and sex,” said Jim Bolin, a Republican state representative in South Dakota who worked as a teacher for 32 years and voted in favor of a failed bill to require transgender students to use bathrooms corresponding to their sex at birth. “The notion that gender is different than sex I believe that’s a false belief.”

One of the report’s legislative recommendations calls for sexual education “that is medically and scientifically accurate, is inclusive of LGBT youth, and covers same-sex activity on equal footing with other sexual activity.” Proposals to state and federal departments of education, school administrators and Congress are also included.

Human Rights Watch interviewed almost 360 current and former students from rural and urban districts, as well as more than 140 parents, teachers and administrators.

The students, whose names were changed for their protection, offered stories of physical violence, verbal harassment, cyberbullying and exclusion from events, classes and extracurricular activities. In many cases, they said, teachers did not intervene and sometimes participated in the harassment.

“My biology teacher my freshman year would bring in kids who were wearing short shorts or weird sweaters and say, ‘You’d better take that off, you’re going to look gay,’” a 16-year-old bisexual girl in Alabama said, according to the report. “But she’d say it in front of the whole class.”

The organization also found school policies and practices have made teachers fearful of negative consequences for identifying themselves as lesbian, gay, bisexual or transgender or for supporting LGBT students.

“There are certainly conservative leaders who have stood up for LGBT students, and our hope is that as we look at this from a purely pragmatic point of view, keeping LGBT kids safe, and keeping all students safe, shouldn’t be a partisan issue,” Thoreson said.

South Dakota Gov. Dennis Daugaard vetoed the bill supported by Bolin earlier this year, but supporters of the measure are hoping to get it before voters in 2018. It’s likely to be reintroduced during the 2017 session.

Some Republican lawmakers in Texas — a state that’s already led a lawsuit resulting in the temporarily blocking President Barack Obama‘s directive allowing transgender students to use the public school bathrooms of their choice — are backing proposals banning transgender people from doing the same in all Texas bathrooms.