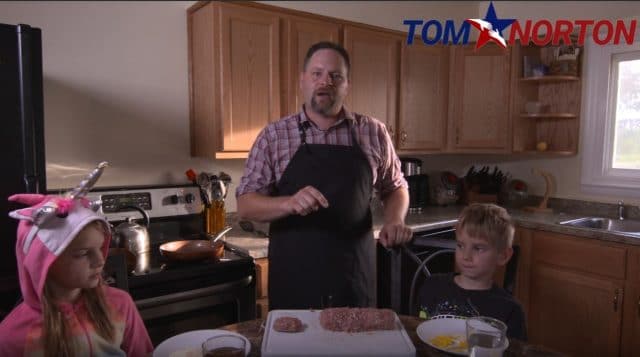 “Justin Amash is having an identity crisis,” Norton says in the ad titled “Hold the Sausage.”

“I’m Tom Norton. I’m a pro-Trump Afghanistan war veteran, a family man, and a tireless advocate for our Military veterans,” he added. “And when I get to Washington, I’m gonna get busy cutting the pork — NOT the sausage.”

Amash appeared to be hemorrhaging Republican support in the aftermath of his impeachment comments. A June 29-July 1 Strategic National poll found him with just 17 percent of the GOP primary vote. That put him in second place behind state Rep. Jim Lower (27 percent), tied with state Rep. Lynn Afendoulis (17 percent), and ahead of former Sand Lake Village President Tom Norton (5 percent) and Iraq/Afghanistan war veteran Pete Meijer (4 percent). Even though he’s a first-time candidate, Meijer could have outsize name identification because his family owns a large chain of grocery stores in the Midwest.