Home Gay Life Republican lawmaker says he’d drown his kids if they came out as... 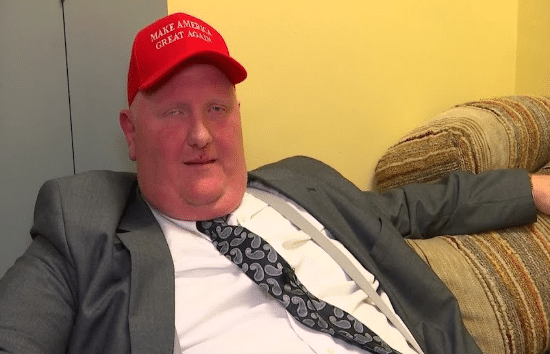 A Republican lawmaker has given a threatening response when asked what he would do if his kids were gay.

Eric Porterfield, a Trump-supporting West Virginia lawmaker, was also under fire this week.

He has previously likened LGBTI people to a terrorist group and the Ku Klux Klan.

A WVVA reporter asked what would happen if his son or daughter came out to him.

‘Well, I would dress my daughter first, as I would take her for a pedicure, I’d take her to get her nails done, and see if she could swim,’ Porterfield said, smiling.

‘If it was my son, I would probably take him hunting, I would take him fishing, then I’d see if he could swim,’ Porterfield, wearing a MAGA hat, also said.

He continued to grin as the reporter asked him to clarify his statement.

‘I just want to make sure they could swim,’ he repeated when questioned, continuing to grin.

Porterfield, a born-again Baptist missionary and is blind, has also said he has ‘no care for diversity of thought’.

Eric Porterfield: ‘The LGBTQ is a modern-day version of the KKK’

In an interview with the Charleston Gazette-Mail, Republican Eric Porterfield said: ‘The LGBTQ is a modern-day version of the Ku Klux Klan, without wearing hoods with their antics of hate.’

Porterfield also referred to LGBTI people as a ‘terrorist group.’

He believes he is being ‘persecuted’ by the LGBTI community in retaliation for his remarks. He has claimed he has also received threats via Facebook and voicemail.

‘West Virginia has no room for someone who expresses such hate, let alone room for him to hold a public office where he is supposed to represent the people of West Virginia,’ she said.

‘His hate-filled remarks and actions speak volumes, and so does the Republican Party’s silence.’