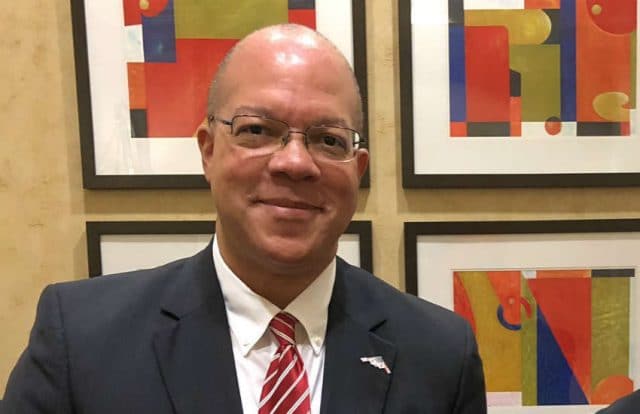 Republicans have condemned a Florida lawmaker who laughed about putting LGBTI people to death.

Speaking at a meeting on 24 May with a Pensacola-based group called Women for Responsible Legislation, one citizen brings up a Bible passage.

They say: ‘In 1 Corinthians, it says that a man who has an affair with another man will be put to death.’

In response, Hill says: ‘It says that in the Old Testament, too.’

Another person at the event suggests introducing legislation to that effect. There is laughter in the auditorium. Hill joins in with the laughter and says: ‘I wonder how that would go over?’

The clip has been widely condemned by both Democrats and Republicans. Despite this, Hill has refused to apologize, tweeting: ‘Absurd to ask me to apologize for a statement that I did not make and that no one took seriously. This is a social media lynching!’

However, Hill continued to attack him: ‘You are a liar. I did not laugh at or discuss legislation to execute anyone. How absurd! You are many things, but truthful is not one of them.’

However, Republicans began to call on Hill to apologize – and even resign. House Speaker Jose Oliva and House Rules Chairman Chris Sprowls released a joint statement, reported by .

‘Such callous indifference to an outrageous question is unacceptable, runs contrary to our founding principles, and in no way reflects the beliefs of the Republican caucus in the Florida House.’

Oliva didn’t call on Hill to resign but said he ‘owes his colleagues an apology and he owes the Republican caucus a better example of political courage.’

Hill caused controversy for wanting to introduce an abortion ban bill in Florida similar to the one in Alabama.