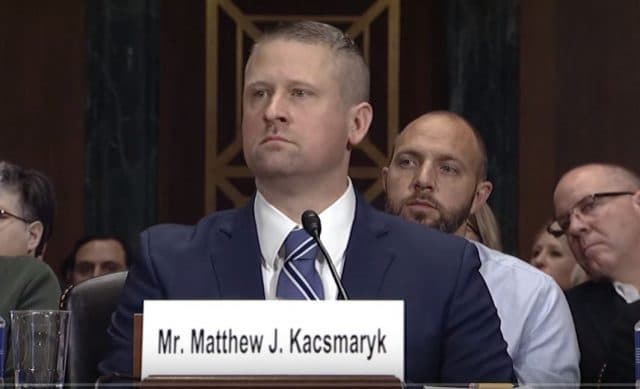 The Senate voted 52-44 on Tuesday to move forward with the confirmation of Matthew Kacsmaryk to be a lifetime federal judge, despite strong objections from at least 75 LGBTQ rights groups over his record of opposition to LGBTQ rights.

Every Democrat present voted no on a procedural step to advance Kacsmaryk’s nomination to the U.S. District Court for the Northern District of Texas. Every Republican but one, Susan Collins (Maine), voted yes, reports The Huffington Post.

Kacsmaryk, 42, is set for his final confirmation vote on Wednesday.

He has called including protections for LGBTQ people in the Violence Against Women Act “a grave mistake.” In 2015, when Utah passed nondiscrimination protections, Kacsmaryk called the law ”a bad idea” because it suggests that discrimination based on sexual orientation and gender identity should be taken as seriously as other forms of discrimination. He signed on to a 2016 letter that called being transgender “a delusion.”

Kacsmaryk also ripped the Supreme Court’s decision in Obergefell v. Hodges, the landmark 2015 marriage equality case. He wrote that “five justices of the Supreme Court found an unwritten ‘fundamental right’ to same-sex marriage hiding in the due process clause of the Fourteenth Amendment ― a secret knowledge so cleverly concealed in the nineteenth century amendment that it took almost 150 years to find.”

“It strikes me as unusual, more than coincidental, that in June – the LGBTQ Pride Month – our Republican colleagues would decide to bring to the floor the nomination of a Texas district court nominee, Matthew J. Kacsmaryk,” said Sen. Dick Durbin (D-Ill.). “This is yet another extreme nominee outside the mainstream of American thinking who does not deserve to be rubber-stamped for a lifetime appointment by the United States Senate.”

“Mr. Kacsmaryk has challenged LGBT people’s right to form families at all, and argued that the families that they have formed are less legitimate than other families,” reads a letter signed by 75 groups including Lambda Legal, Human Rights Campaign and the National LGBT Bar Association. “He has denied in some cases that LGBT people really exist.”

“Mr. Kacsmaryk has dismissed proponents of reproductive choice as ‘sexual revolutionaries,’ and disdainfully criticized the legal foundations of Roe v. Wade. He has described the ‘campaign for same-sex marriage’ as ‘typified by lawlessness,’” Collins said in a statement. “Such extreme statements reflect poorly on Mr. Kacsmaryk’s temperament and suggest an inability to respect precedent and to apply the law fairly and impartially.”

Kacsmaryk is widely expected to be confirmed on Wednesday.