A restaurant has defended a policy restricting a ‘date night’ offer to opposite-sex couples.

However, South African outlet Eyewitness News revealed that the owners explicitly ban gay couples from attending under the rules.

In a clip filmed by the outlet, a manager denies entry to two men on a date, explaining: “It is not that we discriminate but on our Thursday we have it that it is set that way.

“Any other day gay people can come. Our Thursdays, we don’t allow single people, we only allow a man and a woman. We don’t allow same-sex couples.”

It is unclear how exactly the “set up” of the restaurant could prevent two men having a meal.

The manager points to a reservation confirmation from the restaurant, which warns: “No joined tables, no same sex couple, no children, no t shirt or tekkies [trainers]”.

The restaurant’s owner, Sami-Jo Amiras, defended the policy in an interview with Johannesburg’s News24.

They insisted: “Date night is a themed event designed for a man and a woman.

“The reason for stating ‘no same-sex couple’ is not meant to discriminate against anyone, but to control a couple’s event.”
However the South African Human Rights Commission said it is investigating whether the policy breaches the equality clause of the country’s Constitution, which outlaws discrimination based on sexual orientation.

A spokesperson told News24: “There are numerous establishments that still refuse entry or services to people based on their sexual orientation and that this is obviously in breach of our right to equality.”

The Restaurant Association of South Africa also confirmed it would investigate, with Wendy Alberts telling Eyewitness News: “Where a restaurant owner has the right to refuse admission to its clients, they are not allowed to by any means, on any grounds on sex, gender, race, preferences or equalities that the Constitution refers to in South Africa.”

The restaurant has been barraged with negative online reviews in protest over the issue.

One states: “I am honestly shocked to see how narrow-minded this restaurant is. How dare you discriminate against people. Yes, you deny it but your actions speak louder than words.

“Gay or straight, it is a DATE NIGHT i.e you and your significant other would like to have a romantic evening and you are depriving people from doing it.

“I don’t see how someone’s sexuality should determine why they should or should not eat at your restaurant.”

South Africa is the most progressive country in Africa on LGBT equality, safeguarding people from discrimination on the basis of sex, gender or sexual orientation.

Same-sex weddings have been legal since 2006, and same-sex adoption since 2002 – but gay people still face some discriminatory treatment. 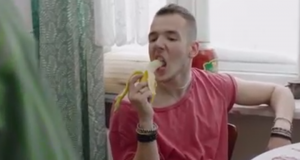 Nick Gayer
0
This new viral Russian ad campaign will be the perfect antidote for those of you who have woken up each day over the past...