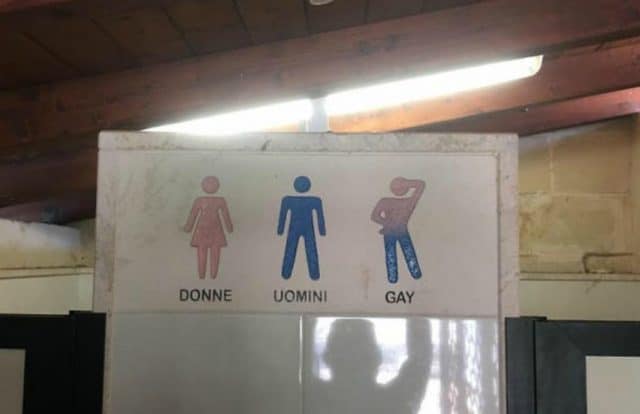 Restaurant owners in Italy can’t understand why their unique restroom sign has caused so much controversy.

The toilet sign at Tenuta de Camporelle a restaurant within a bed and breakfast in Cavallino had three options: men, women and gay. The women and men’s figure were coloured pink and blued respectively, while the ‘gay’ figure was coloured half pink and half blue.

‘It is frankly shocking that in 2017 there are still cases of this kind, where there is a great confusion between gender identity and sexual orientation and it is flaunted in such a misleading and homophobic manner in public places, which only humiliates and hurts people,’ said LEA Association’s Gianluca Rollo.

But the restaurant managers can’t understand what all the fuss was about. They claimed the sign was put there by previous owners and wasn’t even visible until someone uncovered it.

‘We never thought of removing it because we could not see it,’ they told Repubblica.

‘We found out that it had been tampered with and then we removed the sign to avoid further problems.’

They removed the sign, but said it was taken down only because it had been tampered with. The owners also said they couldn’t be homophobic because they’ve had gay customers.

‘We were not in the wrong. And anyway, having removed that sign is worth more than a thousand apologies,’ they said.

‘We have often hosted homosexual couples, with whom we have established beautiful relationships, to the point that some have become family friends.’