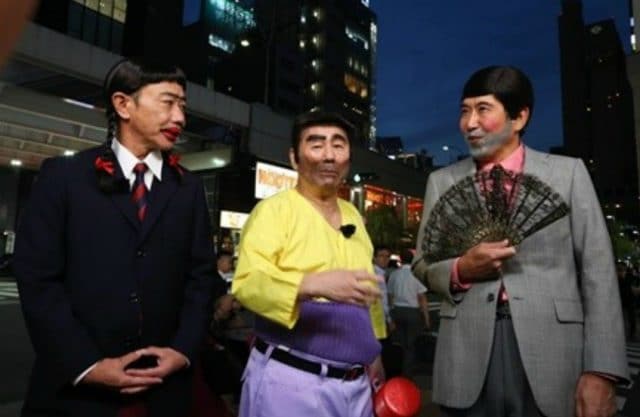 A TV character which had not hit Japanese screens in 28 years was resurrected for a TV special and has caused great controversy.

Homoo Homooda was created by the comedy duo Tunnels in the 1980s. The characters name uses the word ‘homo’ – short for homosexual – and is a derogatory word.

Tunnels brought back the offensive character in a TV special commemorating their 30 year career.

Fuji TV broadcasted the special and received 104 complaints about the character played by comedian Takaaki Ishibashi.
Many complained the character’s trademark black lace fan, blue beard and pink cheeks, and other characters saying to him ‘you’re a homo, right?’ fuelled ‘discrimination and bias’.

During the program one character accuses Homoo Homooda of being a pedophile.

‘There was a middle aged man like you who often waited for us at the park when I was a child, and we used to throw stones to the man and run away,’ the character said during the broadcast.

Not a good idea

A number of LGBTI organizations also complained to Fuji TV, including Good Aging Yells which is run by Gon Matsunaka.

‘I can’t believe they’re still showing this sort of thing,’ he told The Mainichi.

‘When the character first appeared (in the 1980s), it was common for children to use the word ‘homo’ as an insult to boys who were quiet and gentle.

‘I remember feeling uncomfortable at the time, especially as I was of a susceptible age. I wonder how children who are unsure about their gender or sexual orientation felt when they saw this one-off program.’

The CEO of Fuji TV, Masayoshi Miyauchi, was quick to apologize for the stereotyped portrayal.

‘This is a character that Tunnels created and worked on during their 30 years (with this program),’ Miyauchi said in a press conference.

‘If there are any aspects that have caused discomfort then it is necessary for me to apologize.’