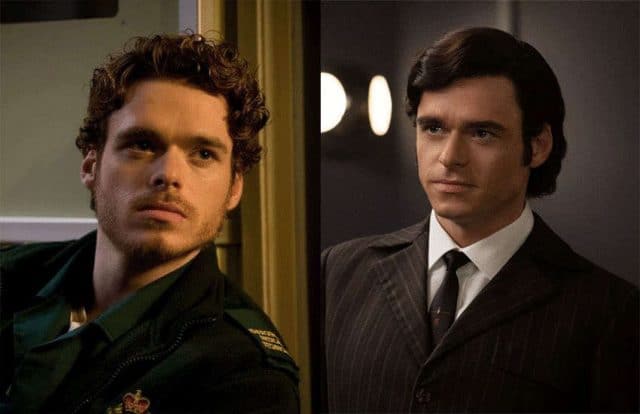 Richard Madden has highlighted a crucial difference between the gay sex scenes in his latest film Rocketman and similar scenes in 2011 TV show Sirens.

The actor played a sex-mad gay character Ashley Greenwick in the Channel 4 show, about about an English ambulance team in Leeds.
Meanwhile, in the Elton John biopic Rocketman, out this month, he plays the pop icon’s former lover and manager John Reid.

Speaking to GSN ahead of Rocketman’s London premiere last week, Richard said: ‘I didn’t actually have flashbacks to Sirens [while filming sex scenes for Rocketman]! Sirens was a different beast…’

‘Sirens was always kind of more of a much messier hook up, slightly comedic way of doing things,’ he furthermore explained. ‘Whereas this was more tender, delicate.’

‘It’s important, we need to say more of that, so it’s not such a big deal in general’ he also said of gay sex scenes on TV and film.

Speaking about his Sirens character to . at the time, Richard said: ‘He’s a gay character who’s kind of straight in every sense of the word, except that he has sex with men.

‘That’s what I was excited by, because I don’t remember the last time we saw that on British TV.

‘We don’t really get to see gay characters who are completely open with their sexuality, but it doesn’t define who they are.’

Richard has also appeared in hit TV shows such as Game of Thrones and The Bodyguard.