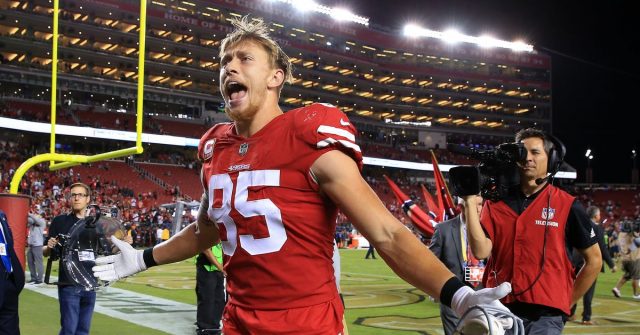 San Francisco 49ers’ Richard Sherman and George Kittle are part of an official team announcement on the formation of a group for fans who identify as LGBTQ+.

“Forty-Niner faithful — you’ve helped us pioneer a group of dedicated fans for over 70 years. We’re proud to announce 49ers Pride, the official community of 49ers fans who identify as LGBTQ+ and allies,” Sherman, a cornerback, said in the team’s video announcing the group.

“As we prepare for the upcoming football season, we want to celebrate the passion of all the faithful, no matter how they identify,” said Kittle, the team’s starting tight end. “If your team is the Red and Gold, you belong in the 49ers family.”

The group is the first in the NFL specifically team-sanctioned for LGBTQ fans and it was a great move to have players part of the announcement. There are no openly gay players on the 49ers or anywhere in the NFL, though the 49ers do have an openly gay assistant coach, Katie Sowers. Having two name players participate gives the formation of the group more meaning.

The 49ers do have a historic legacy in the gay sports movement. Dave Kopay was a running back on the team from 1964-67 and came out after he retired and became and LGBTQ sports icon. An exhibit on Kopay is part of the 49ers’ Hall of Fame at their stadium in Santa Clara.

49ers Pride is the first NFL team-sponsored group that officially recognizes its LGBTQ fans. The Chargers have held viewing parties in Los Angeles for that fan base and other teams have done one-offs.

Here is the official news release from the 49ers:

SANTA CLARA, Calif. — The San Francisco 49ers today unveiled the creation of 49ers PRIDE, believed to be the first-ever fan community started by an NFL franchise to directly engage and support LGBTQ+ fans and allies. Prospective members of 49ers PRIDE are invited to sign-up at 49ers.com/PRIDE to join fellow members for watch parties for 49ers games and other unique opportunities like marching with the team’s front office at San Francisco Pride.

The announcement was made by 49ers President Al Guido at the LGBTQ+ Activism in Sport Town Hall at Levi’s Stadium co-hosted by the 49ers and San Jose State University’s Institute for the Study of Sport, Society, and Social Change.

Guido was one of several prominent sports figures to speak at the event, including: Ezra Baeli-Wang, captain of the NCAA Division 1 men’s fencing team who led student-athlete opposition to North Carolina’s anti-LGBTQ law, Phaidra Knight, professional rugby athlete, named top player in the world for her position in 2002 and 2006 and the U.S. Rugby Player of the Decade in 2010, and Lori Lindsey, professional soccer athlete who played on the U.S. Women’s National team at the 2011 Women’s World Cup and helped earn the 2012 Olympic gold medal. The event was moderated by Anne Lieberman, director of policy and programs of Athlete Ally.

“The 49ers organization is proud to welcome 49ers PRIDE – the official community of 49ers fans who identify as LGBTQ+ and their allies – to our network of fan groups that connect members of the Faithful with our brand and create unique engagement opportunities,” said Guido. “We want every fan to feel like a part of the 49ers family and we look forward to furthering our presence in the LGBTQ+ community through this initiative.”

In alignment with the 49ers dedication to community work, the new affinity group will also provide opportunities to attend philanthropic and social events with like-minded members of the Faithful and engage members on broader issues within the community. Lastly, special edition merchandise will be on sale at the 49ers Team Store inside Levi’s Stadium and at shop49ers.com with all 49ers proceeds going to support LGBTQ+-focused non-profit organizations.

49ers PRIDE is an extension of the franchise’s long-standing support of the LGBTQ+ community and allies, including almost $150,000 in donations since 2005 to local nonprofits such as GLAAD and the San Francisco LGBTQ Center. Additionally, the 49ers hosted a special screening of “Out to Win,” a documentary chronicling the lives of LGBTQ athletes, in partnership with the LGBT Film Festival back in 2015 in conjunction with Super Bowl 50. Furthermore, the team has sponsored and hosted GLAAD Awards at Levi’s Stadium. In addition, 49ers leadership have also contributed personal funds to related causes, such as the $75,000 donation by 49ers CEO Jed York in 2016 to the Equality North Carolina Foundation in rebuttal of the state’s House Bill 2 law.

The launch of 49ers PRIDE furthers the organization’s demonstrated commitment to diversity, equity, and inclusion for its employees and supporters. In 2016, the 49ers implemented diverse slate interviewing practices, ensuring that women and people of color are included in the interview pool for every full-time business operations position posted by the team. The team has since pledged to ensure that hiring process involves a diverse set of interviewers as well. …

Fans can join 49ers PRIDE for free and receive communication and invitations to events throughout the year. To learn more or to sign up, visit 49ers.com/PRIDE.