Home Fiction Rick’s Diary: A weekend with the boys 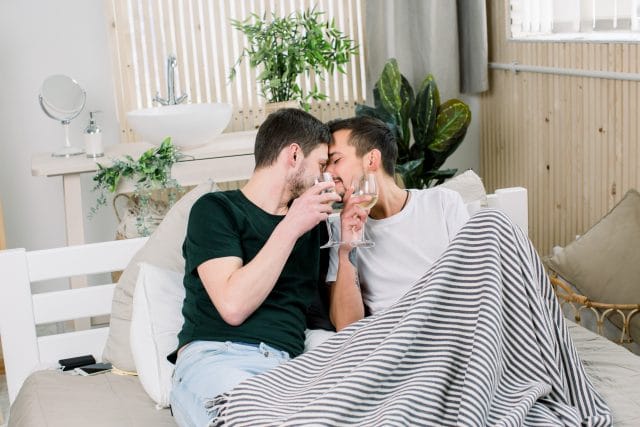 In a world where almost everyone was against his choice of love life, Rick decided to choose his own friends wisely. He was disowned by his parents at the age of 15 when he boldly told them he was gay. His father almost beat the hell out of him that night. Rick had to run away from home. He had made new friends who share similar love stories with him. He has found a way to make himself comfortable with his friends. He is beginning to love the world again as he recounts one of the stories in his diary.

The boys have always laughed at Adrian, how he shares a funny love story with Chloe. Adrian would brag about having sex, a couple of times with Chloe, but the guys could see obviously that he wasn’t really enjoying the times spent with her. Looking out for a brother, they decided to ask him to invite Chloe over. Adrain was still caught up in a world that made him have dual personalities. He didn’t want to admit to the world and some of his close relations that he was gay. So he started dating Chloe to cover up his sexual orientation.

“Yea, we want to help you have a great sex’, added Rick.

All four burst out with laughter, including Adrian who was acting as if he wasn’t enjoying the conversation. Adrian was always unsure of the reaction Chloe would have, if he found out he was a bi-sexual. He calls himself a bisexual but wasn’t sure that suits him. Adrian had always had a thing for not-too muscular dudes. He likes men with broad chests and hairy chests. His fantasies always mix up the above description with imaginary women with big breasts. He met Chloe, the fall of last year. She was so hot with big boobs that Adrian could see the breasts dangling out from her short see through tops.

They hooked up immediately and boom!

Chloe was her kind of woman. She was so real and straight to the point. She told him how she loves tall men with flair such as him. She was too direct that she gave him a blow job that night. Adrian was so satisfied with Chloe that night because his dick hadn’t been sucked like that, even by his boyfriend Sunny. Sunny is a latino-bottom. They broke up last year when Sunny started being too arrogant towards him. Sunny would always complain that he doesn’t like how he looks at women or flirts with them while he was there. Adrian would try explaining but they always ended up quarreling.

Coming back to reality, he noticed it won’t be easy coming home with Chloe, with the boys all ready to see how things play out. Meanwhile Adrian had this thing for Tom, the new guy who just moved into the block. Tom had joined them to play some games together.

‘How am I gonna cope if Chloe ends up sucking Tom’s dick?’ he thought to himself. ‘It would be amazing’, he finalized while walking to his bike.

Terry and Ben had gone to get some groceries at the store. He almost forgot that the house would be fuller than the way he is leaving it now. He is so excited to see how this would play out. Terry is a strong, independent dominate gamer with a strong sense of smell. He can perceive a huge dick from miles out, so he often says. Ben on the other hand, is almost opposite to Terry. Ben is more like a brute, mentally slow, sexually fast and aggressive. However, he had noticed how gentle he could be especially when Rick is around. It is almost glaring to him and perhaps to the rest that Rick owns a soft spot in the brute’s heart. Even though he wants to have Rick at full swing in his imaginary mind, but he is just keeping his feelings to himself for now. He snaps out of fantasies and realized he is almost walking to the wrong direction to his bike was parked.

‘Let me go and get Chloe first’, he thought to himself.

Rick got a call from Ben. He knew the call would spell good things and he was right. Ben just called to ask him if he would love to have some French fries so he would buy it over for him.
The weekend was already looking so exciting. It is a full house and they are having two guys visiting them too. Tom the new cute guy from the block is here and Ben, a new guy he just started hanging out with came over for the weekend. Tom is a lightweight bottom and a slim thick stone mason.

‘Sure, I would love some French fries. Tell Terry that his phone has been ringing ever since. His dad has called him over five times. He should go out with his phone more often’, Rick replied.

Rigsby went to take his shower and came out wearing sexy cologne. Tom could sense he is getting ready for something or someone and so he didn’t hesitate to ask.

‘Is he coming tonight?’

By he, Tom meant Luke. Luke was Rigsby’s partner with whom he had encountered numerous ups and down. He had caught Luke with some guys for umpteen times but he would deny that there was nothing going on. Rigsby had decided that he too could have fun with other boys since that is what it looks like.

He replied Tom with a smile on his face. ‘Nope, am just getting ready for a warm weekend’

There was a knock on the door and everyone was curious to see Chloe and Adrian walk through the door. However, it was Terry and Ben who just got back in. Rick was excited. He rushed and took the package that he sensed was his. He placed a deep kiss on Ben as if to thank him with more kisses.

Rigsby could sense his dick rising on seeing Terry. It wasn’t just him that sensed it. Tom too spotted it out. Tom got excited too and showed Rigsby’s bulge to the rest in the room.

You had been reading FREE part
of our 100% exclusive Hot Story.

Or click here, if you want to read for free