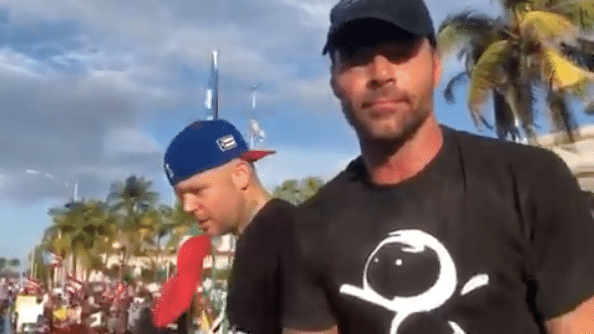 Ricky Martin has joined the thousands or protestors calling on Puerto Rico’s homophobic governor to resign.

Governor Ricardo Rosselló has been facing criticism for some time now regarding his mishandling of Hurricane Maria funds in 2017. The situation became exacerbated last weekend when a local media outlet published almost 900 pages from a leaked private group chat between him and 11 of his cronies revealing homophobic, misogynistic, and other vile remarks.

Among the homophobic writings are jokes about people’s sexualities and repeated use of the word “c*cksucker,” as well as the terms “unprecedented c*cksucker” and “historic c*cksucker levels.”

In one message, Rosselló takes aim at Martin, writing: “Nothing says patriarchal oppression like Ricky Martin. Ricky Martin is such a male chauvinist that he f*cks men because women don’t measure up. Pure patriarchy.”

Other messages include wisecracks about people’s weight, calling his female colleagues “whores,” fantasizing about shooting political opponents, and celebrating an activist’s untimely death.

On Monday, thousands of demonstrators gathered outside of the governor’s mansion in San Juan to voice their anger and demand Rosselló’s resignation. Days later, the protests are still going on.

Yesterday, Martin joined fellow Puerto Rican artists, including rapper Reisdente, Bad Bunny, and iLe, to voice their outrage with Rosselló as well as with police who have been using tear gas and rubber bullets to control the crowds.

Martin also took to Instagram to offer a scathing rebuke of Rosselló.

“We’re tired of the cynicism,” he said in a video. “They put down women. They put down the LGBT community, people with disabilities. Corruption, it is insane.”

“We are tired. We can’t take it anymore. I do live in America, but I have to come to Puerto Rico to let the world know that we will make a change. That Puerto Ricans get together and if we do it orderly, we can make it happen. And that’s why we’re here today. He’s [Rosselló] going to listen to us.”

Despite the enormous public outcry, Rosselló has refused to step down, telling a local radio interviewer this week, “I’m going to continue. We are all bruised. I’m bruised. But I recognize it, and I have to get back up.”

Meanwhile, legislation to bring impeachment charges against him has been introduced in Puerto Rico’s House of Representatives, though leaders from the governor’s New Progressive Party say they want to give him a little more time to “reflect on his future.”