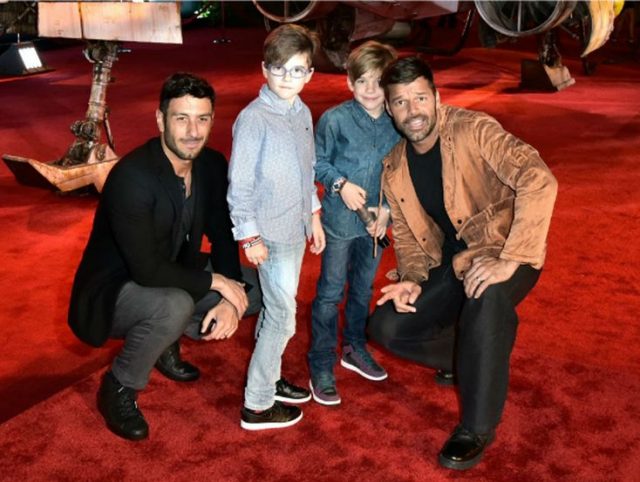 If you were feeling relatively good about your love life, then don’t check out these pics of super hunk newlyweds Ricky Martin and Jwan Yosef, because you’ll realize that everything’s smoke and mirrors and you’re spiraling into lifelong spinsterhood and loneliness as you write this post. Or maybe I’m just projecting. My point is that it just doesn’t get cuter than Martin and Yosef, who recently stepped out for the first time since announcing their nuptials earlier this week. Martin had this to say about their marriage during the premiere of his hyped to dang death FX series The Assassination of Gianni Versace: American Crime Story:

I’m a husband, but we’re doing a heavy party in a couple of months, I’ll let you know. We’ve exchanged vows, and we’ve swear – everything, and we’ve signed all the papers that we needed to sign, prenups and everything. It feels amazing! I can’t introduce him as my fiancé. I can’t. He’s my husband. He’s my man.

Bleh. JK! I can definitely feel happiness for others! The duo recently took their combined sexiness to the streets of West Hollywood, where they were positively styling, and yes, profiling in their casual wear. The paps are eating these two up, and it’s honestly nice to see a gay couple gracing mainstream headlines. As much as I want to see Spencer Pratt and Heidi Montag hosing each other off in their driveway, I think it’s time for more Martins and Yosefs in this world. And to be quite frank, after seeing these pics, emphasis on the Yosefs. Damn. These particular pap pictures are opal ruby diamond double cash back preferred plus, so you’ll need to hit the link below to check them out and feel terrible about today and the rest of your life. I mean, JK! Nick, keep it together girl. K bye.