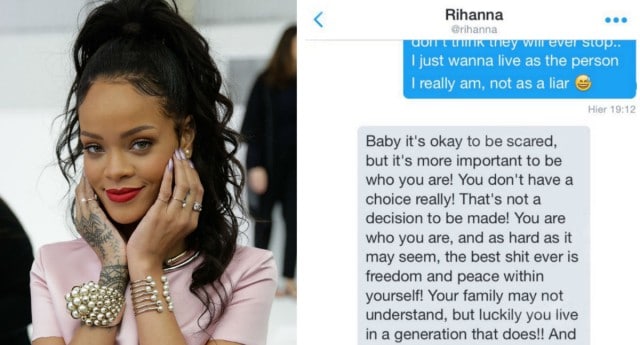 One young guy who struggled to come out as gay has found main support in his favourite superstar.

Singer Rihanna decided to support gay man who opened the doors of his closet wide open and wanted the whole world to know about his sexuality.

The man, who decided to stay anonymous, shared a direct message which he had sent to the star. In this message he told Rihanna about his life struggles.

Here is the text of this message:

The guy couldn’t believe when he got such a supportive message from the singer who told him: “It’s okay to be scared, but it’s more important to be who you are!”

After his coming out the man faced different reactions of his friends. He wanted to share them with her and they continued conversation. Replies full of heartfelt and supportive words from Rihanna followed one by one.

One of her last messages was: “I’m so proud of you! I’m glad to see you finally happy with yourself!!

“Being who you are is the only way.”

Rihanna’s messages helped black gay man a lot. He became courage enough to accept who he really is and make society accept his sexuality. He stoped be ashamed of who he is. Encouraged by singer’s support he did what he was so eager to do!

It’s great when you can find support in your favourite celebrities who seemed to be so far. This man is lucky. Rihanna helped him be who he wanted to be! It’s the most important thing!