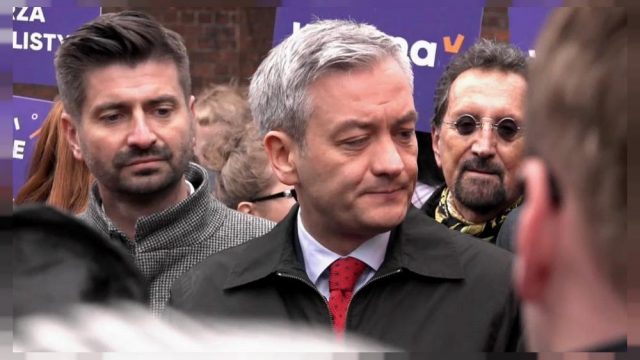 Euronews is on a road trip to feel Europe’s pulse ahead of elections later in May. Our correspondent Vincent McAviney is in Poland.

Poland is generally perceived as one of Europe’s more socially conservative countries — and it’s thought to be drifting further to the right under the current Law and Justice Party government.

He’s been campaigning with his partner and fellow candidate Krzysztof Śmiszek.

Biedron has set up a new party, Wiosna — translated as Spring. And it’s been gaining in the polls ahead of next week’s elections.

The left-wing party’s slogan is “Finally A Change” and the reformist 42-year-old is being likened to French President Emmanuel Macron.

Biedron told Euronews: “Our party Spring brings freshness, optimism. It is something for the future that is progressive for Europe and for Poland.

“There is momentum for change because before we established our party, all the opinion polls were suggesting that right-wing populists would govern Poland in the coming years — but now there is a hope that we can stop it.”

“Europe is attacked by populists; we see it in Poland, in Hungary, Italy, Romania and Greece. So this our answer to the populist movement.

“We need more involvement from Europe, we need a united Europe, one that cares about everyone and that looks after everyone.”

Some critics say Biedroń’s chances of election in such a conservative country are slim, but Professor Zbigniew Nęcki, Jagiellonian University, one of Poland’s leading social psychologists, thinks Biedroń could be around for a long time.

“In my opinion, Robert Biedron has a chance to hold office for many terms. He is an important man and his views are positive ones for our community

“So, let us restrain ourselves from one-sided condemnation. If a man speaks wisely, acts sensibly and shows the positive sides of our social coexistence, I believe that it will be appreciated.

“Not only today and tomorrow but also the day after tomorrow, in a month or even several elections.”