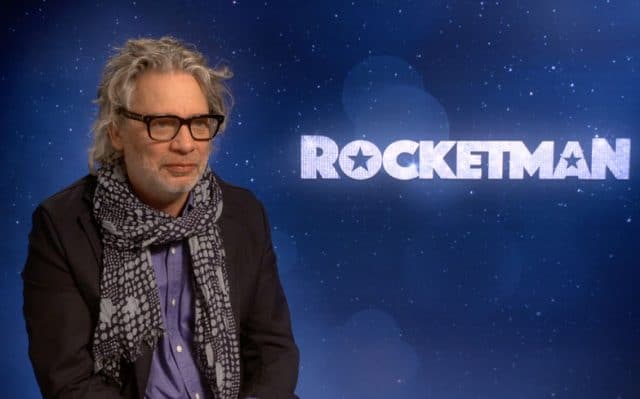 The new film sees Taron Egerton take on the role of the iconic British musician, while Richard Madden plays John Reid, his former lover and manager.

When it came to portraying their relationship on screen, director Dexter Fletcher did not hold back.

There’s emotion, tension, desire, heartache and, in what is being described as a first in a huge mainstream movie released by a major studio, a full on gay sex scene.

Sitting down with Dexter Fletcher in London, we spoke to him about the importance of not diluting Elton’s sexuality for this big screen story of his life, and why it was important not compromise in the editing suite.

The director said he is “proud” of the final edit, and hopes he has done right by LGBTQ viewers.

However, when it came to the topic of the censors cutting the gay scenes in countries where there are anti-LGBTQ laws, Dexter told us that he hopes they have a more “enlightened approach”.

“The issues are theirs, it’s not the film’s responsibility,” he said. “If the film is then cut or censored in order to pander to someone else’s fucking problem, I can’t be happy about that. I can’t be because what we’re looking at is creating a film that looks at as many aspects of Elton’s life and who he is.

“I make the film I want to make and I submit it to the censors. If they have a problem with it, they can say, ‘Well if you cut this, it’ll be that.’ I’m not going to do that. I made it very clear that this is the film I made – I’m not cutting it.

“I can’t control vast countries who want to take it out, but I would hope with times being as they are there would be a more enlightened approach. I don’t know if that’s always the case – the world is a strange and silly place at the best of times.”

Rocketman follows Elton John’s life from a little boy growing up in Pinner through to his early 40s when he found himself in rehab recovering from alcohol and substance abuse.

The movie blends traditional biopic storytelling with elements of fantasy to the soundtrack of Elton’s most beloved hits.