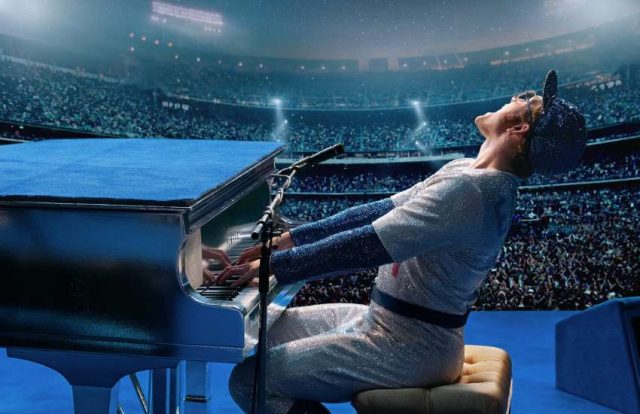 Director Dexter Fletcher all but saved last year’s problem-plagued Freddie Mercury/Queen biopic Bohemian Rhapsody when he replaced the troubled Bryan Singer at the eleventh hour. As such, blaming him for any perceived ’straight-washing’ of Freddie’s bisexuality in the film would hardly be fair.

But when reports emerged of a gay sex scene cut from his next film, Rocketman – this month’s Taron Egerton-starring Elton John biopic, arriving with astronomical expectations – I was ready to throw an Elton-style tantrum. Complete with tiaras.

It’s a profile of one of pop’s most glittering gay icons, I thought. Can we really trust a straight man to understand how gay it needed to be?

The reports, though swiftly-denied, also made me reevaluate the debate around straight guys playing gay. In Rocketman’s case, that’s Taron and his co-star Richard Madden as Elton’s vampiric manager John Reid.

Well, I caught the movie on Saturday night. And be it down to the Dexter, Taron and Richard, or Elton’s producer husband David Furnish, or executive producer Elton, or all of the above, Rocketman is wonderfully, stupendously gay. (Also, Elton recently dismissing criticism of Taron’s casting as ‘bullshit’ is telling. If he approves, why shouldn’t we?)

Furthermore, as reportedly the first studio movie to feature male gay sex scenes – spoiler alert: they survived – Rocketman’s already a history-maker. I can imagine they were toned down a bit though. ‘Raw’, ‘explicit’ and ‘electric’ are words Taron has used the describe them, and that’s an overstatement.

The sex scene at the heart of the film, though, is beautiful. In it, a giggling Elton and John roll around naked as sun filters through drawn curtains. I saw a backside, I don’t know whose. It’s a rare moment of light in a dynamic depicted as dark.

Indeed, the sexiest moment, and one I didn’t see coming, is also painful to watch. It involves a brazen John receiving a blow job from an assisstant (and ‘in front of the pool boy!’ screams a scandalized Elton).

Richard Madden is deliciously arrogant in this moment and throughout. He’s cool and inscrutable, save for a sly smirk and a glint in his eye.

However, the most remarkable performance is certainly Taron’s. Like Rami Malek as Freddie Mercury, it’s part imitation, part living/breathing embodiment of a one-of-a-kind personality. It’s gutsy, colorful and he sings brilliantly. The acting’s occasionally soap-ish, but came on – it’s Elton! (Remember when he got disinvited from Madonna’s Christmas card list in 2004?!).

Basically, if you enjoyed Bohemian Rhapsody, you’ll love the grand and glossy Rocketman. Fletcher told me in London today that he didn’t set out to create a ‘cinematic universe’, but there are huge overlaps in style and tone that make the films spiritual cousins.

Indeed, this version is bookended with hope and happiness. It starts with a visual gag: Elton entering rehab dressed as a bejeweled devil. ’I’m an alcoholic, sex addict and probably a shopaholic’ he announces.

It ends with a flash-forward of the star, 28 years sober, with his gorgeous family. (The closing credits tell us he still has a shopping problem.)

What happens in between is a rollercoaster, of course. Inevitably the film’s guilty of packing in too much, but also not enough. Several of my favorite songs didn’t get an airing.

But the lows are where things get really interesting. They largely revolve around Elton’s emotionally abusive parents: absent father Stanley (Steven Mackintosh, who gets lost in the mix) and his cruel, bitter mother Sheila (Bryce Dallas Howard, who devours every scene she’s in).

I for one had no idea how disinterested Elton’s parents were in their son or his achievements. Now I appreciate him all the more for it – and that makes the film immensely valuable.

Also I cried at the bit when he writes Your Song. Truly, Rocketman soars.