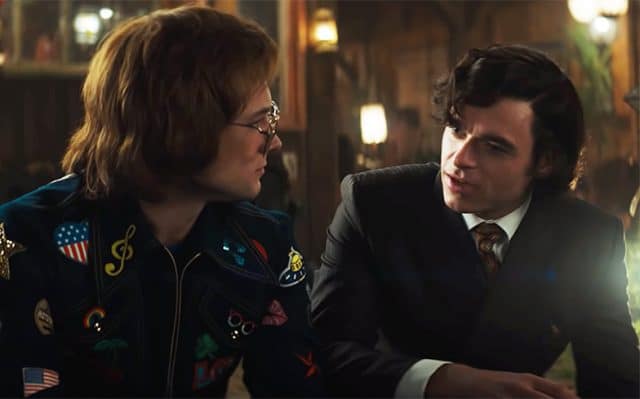 Madden plays Elton John’s manager and lover, John Reid, in the new Elton John Hollywood biopic. Taron Egerton stars as Elton John in the film, which depicts the singer coming to terms with his sexuality.

Madden said, “The more we have these things in films the less of a big deal it’s going to become, and that’s what it should be – it shouldn’t be a big deal.”

“But, particularly for us in this film, that scene is such a pivotal moment for Elton – it’s the first time he makes love with someone, it’s a really important change point in his life,” he said. “And it gave us an opportunity to show their intimacy and that delicateness that’s really important to represent the start of that love story.”

The film shows a naked scene between Madden and Egerton, as well as passionate kissing between men.

This is the first time that a major Hollywood studio has shown a gay male sex scene on screen.

Rocketman premiered at Cannes this month, where it was given a standing ovation. The film also stars Jamie Bell as Elton John’s songwriting partner, Bernie Taupin, and Bryce Dallas Howard as Elton John’s mother, Sheila Eileen.

Rocketman begins with young Reg Dwight, a piano-playing wunderkind, who lives with his self-absorbed mother (Bryce Dallas Howard) and is pained by the lack of affection shown by his father (Steven Mackintosh).

Reg rechristens himself Elton John and a chance encounter with songwriter Bernie Taupin (Jamie Bell) changes both of their fortunes.

The plot charts John’s early success and his meeting future manager and lover John Reid (Richard Madden), which is followed by astronomical success and with it the excess of drugs, alcohol and sex.

Rocketman is released in the UK on Wednesday (May 22).