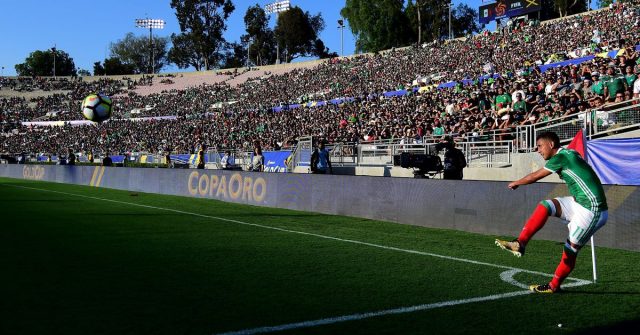 On Saturday both the Rose Bowl and Concacaf allowed the anti-gay and homophobic “puto” chant to descend on the crowd as many as 50 times, according to video and people on Twitter. The response by both Concacaf and the stadium to try to stop the chant were designed to fail and simply pay lip service to people trying to stop the discriminatory behavior.

The chant during Mexico’s 7-0 routing of Cuba was widespread, very loud and involved a huge number of people in the stands.

The “puto” chant is anti-gay and is designed to belittle opposing male players by likening them to prostitutes and women. The chant is, at its core, indisputably anti-gay and FIFA itself has labeled the chant discriminatory.

Concacaf told Outsports through a spokesperson that the organization chose to only address it through feckless public announcements.

“On this occasion the most appropriate action, with the safety and security of all spectators in mind, was to make PA announcements urging a group of fans at the game to refrain from discriminatory chanting,” Concacaf said.

The organization also told Outsports it is engaged in an “inclusivity initiative, with all of the federations and stakeholders across our region,” with the aim “to encourage fans to consider the impact their behavior will have on others.”

Concacaf has thus far made it very clear that it will not engage in any activity that will actually stop the discriminatory behavior. As we’ve seen, public announcements and campaigns have only emboldened Mexico fans to chant more and louder. Concacaf’s absurdly weak response to date should now be considered tacit consent. While MLS clubs are now targeting fans for removal from their stadiums, Concacaf responds with PSAs.

As we at Outsports have said for years, the only way to curb this bigoted behavior is to suspend the matches when it happens and complete them in an empty stadium if it continues. There is no other action that will stop the behavior from Mexico fans. Period.

FIFA is now recommending that matches be stopped, suspended and possibly abandoned if discriminatory behavior like this occurs during a World Cup qualifier.

We again implore Concacaf and FIFA to implement this procedure, or LGBTQ athletes, coaches and fans will continue to be the victims in this verbal assault.