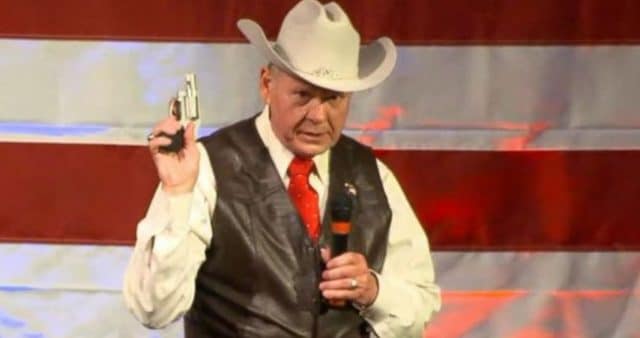 Roy Moore, the anti-LGBTQ former Alabama supreme court chief justice who lost a special election Senate race in 2017 after being accused of sexually assaulting multiple teenage girls while he was in his thirties, announced Thursday that he will run again for the seat.

His new Senate bid comes despite a warning from President Donald Trump he “cannot win, and the consequences will be devastating” for the Republican agenda if he were to try.

“Republicans cannot allow themselves to again lose the Senate seat in the Great State of Alabama,” Trump tweeted. “This time it will be for Six Years, not just Two. I have NOTHING against Roy Moore, and unlike many other Republican leaders, wanted him to win. But he didn’t, and probably won’t.”

Moore, who was defeated by former U.S. Attorney Doug Jones, a Democrat, has denied all allegations of sexual misconduct which were first reported by The Washington Post.

Asked what he plans to do differently this time around, Moore said, “I would like to make more personal contact with people. I mean, we did last time with rallies, we did with different things. But I’d like to get out personally, home parties, more personal contact, and travel the state. People of Alabama know me. That’s one thing I don’t have a problem with.”

Moore, who as chief justice of Alabama’s Supreme Court tried to block same-sex marriage in his state, is a lifelong foe of LGBT rights.

Moore once compared opponents of same-sex marriage to Holocaust victims and said the legalization of marriage equality was “worse” than the Dred Scott decision that ruled that African-Americans were property, not citizens.

GLAAD issued a press release highlighting some of the many anti-LGBTQ things Moore has said over the years, including saying trans people have “misguided confusion over their God-given chromosomes,” that being gay should “be against military policy as was the law prior to Bill Clinton,” and calling LGBTQ-inclusive hate crimes laws a “dangerous trend” that make it “illegal to speak out against homosexuality, even when such an immoral lifestyle is publicly paraded in the streets.”

“Roy Moore just won’t take ‘no’ for an answer,” Zeke Stokes, GLAAD’s chief program officer, said in a statement. “Alabamians have spoken loudly and clearly — his brand of hate is out of touch, out of date, and out of line with American values.”

In a statement, the Human Rights Campaign said it looked forward to opposing Moore and helping Jones win reelection to the Senate.

“Roy Moore is one of the most anti-LGBTQ politicians in the country,” HRC’s National Press Secretary for Campaigns Lucas Acosta said in a statement. “He has been removed from almost every elected office he’s held for misconduct and lost his previous bid for the Senate despite Republicans previously holding both Alabama Senate seats for 20 years.

“It’s unclear why he would want to be denied yet another public office or put Alabamians through another Roy Moore candidacy, but we look forward to helping Sen. Doug Jones defeat him — again,” Acosta added.