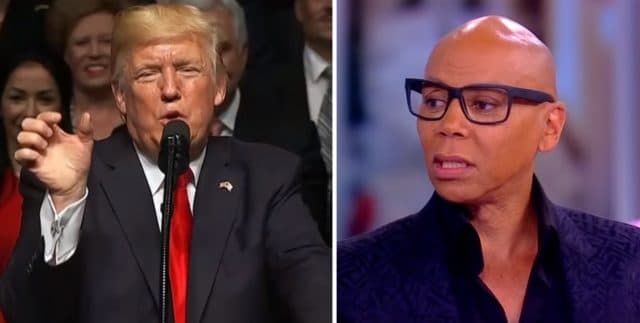 RuPaul “had one thing to say” about the president’s call to “stand in solidarity with the many LGBT people” on Twitter: “Actions speak louder than tweets,”

In his tweet, Trump voiced support for the international campaign to decriminalize homosexuality worldwide, launched by U.S. Ambassador to Germany Richard Grenell.

….on the basis of their sexual orientation. My Administration has launched a global campaign to decriminalize homosexuality and invite all nations to join us in this effort!

Trump’s tweet came one week after his administration published a proposed rule that would remove discrimination protections in health care for transgender patients and while his administration was rejecting requests from U.S. embassies to fly the rainbow flag on flagpoles during Pride month, three U.S. diplomats told NBC News on Friday. It also comes after the administration began implementing a new policy that allows adoption agencies to deny LGBTQ couples the same day, reports ABC News.

GLAAD (Gay & Lesbian Alliance Against Defamation) compiled a comprehensive list of actions the administration has taken that threatened or rolled back protections for LGBTQ Americans.

RuPaul also had something to say about the “Boston Straight Pride Parade” tentatively scheduled for August 31.

“It’s pride season and we’re talking about shame,” RuPaul explained. “We want to sort of balance the conversation by giving people pride.”

Watch the segment, below: