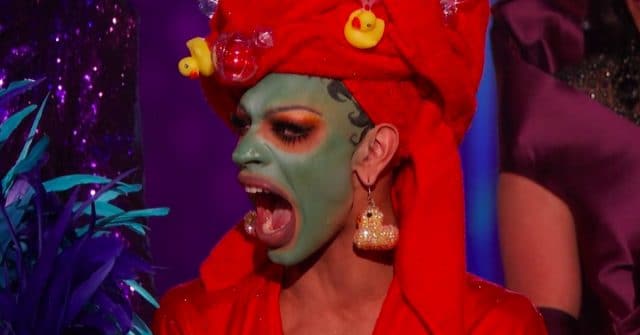 This is it. The most exciting Drag Race episode of the lot.

Shot the day after the finale, it’s designed to eke out every ounce of bitterness the queens have tucked away. It’s a chance for the overlooked, the looked down on, and those that looked like the villains to clash back at their edit and make a final pitch for All Stars.

It’s real, raw and rich. Usually, the more mundane the season, the spicier the reunion. So, was it as eleven-gendery this year?

The Drag Race queens are reunited ahead of next week’s finale. (Netflix)

How much Charisma, Uniqueness, Nerve and Talent was the reunion packing?

It was the best episode of the season by a cuntry mile.

I’m not convinced we were proffered similar prizes this year.

But maybe it’s splitting synthetic hairs to endlessly demand we’ve-never-seen-this-before TV, because—unless queens start setting themselves on fire to win a lip sync—at some point we just have to be OK with them retreading the old steps in different outfits.

So many were stun, but Brooke Lynn Hytes won the day. Condrags.

Also, props to Shuga Cain for dressing as our and I oop goddess, Jasmine Masters.

We’ll judge the juiciness of their jush in a sec, but first off here’s to the queens left on the cutting room floor.

While Miss Ganache had a surprisingly easy ride—what happened to all that Soju drama?—two other sweet treats were likely less ecstatic over their erasure. We were given barely a nibble of poor Shuga Cain and Honey Davenport.

Shuga at least has her fans. But thinking back to the moment just after Honey’s elimination—the scream and fall to floor—I can’t help but feel she’s had the roughest ride this season. It’s not a thought that sparks joy.

Absolutely not, no, non. Next!

What, and I cannot stress this enough, were you on about?

You had one chance to redeem your abysmal run on Drag Race and that was the incomprehensible hill you chose to die on?

I’d still like Kahanna back for All Stars, but only if a spot opens up on the Pit Crew.

Damn, boy. The trade of the season, Kahanna Montrese. (Netflix)

Anticlimactic apologies do not a good reunion make. The limited bitterness was likely down to the fact they’re both finalists. But still, the resolution felt unearned.

Were her web of lies cut down to pieces for all to see? Not really. It was lightly hinted at and then they all swiftly moved on. Chickens.

Rather painful, actually. How many more chances you going to give these girls, Ru? At least some of the clapbacks were as en pointe as Brooke’s Mummy.

Soju: “You should read my article, ‘How not to fall in front of RuPaul.’”

Mercedes: “Right after Season 11, you were just a meme-“

Vanjie: “Want me to read that for you? And what the f**k are you? A meme that’s still going to last longer than you, b***h. Yo opulence, where you got the jokes from you better ask for a refund. $25 a joke, she need her money back.”

When you come for Vanessa, you better not miss Vanjie.

But while fans at home might rejoice, she was hardly grilled to any meaningful degree.

Who knew everyone hated Scarlet, eh?

It didn’t make Brooke look particularly loveable—though fair play to Ms Hytes for not shying away from it—but it definitely increased the already-beloved Scarlet’s currency.

Now the only people who hate her were in that room. Expect her back, soon. We stan a misunderstood queen.

I was truly shooketh at the break up of the most significant queer couple since the gay couple from Arthur.

I feel catfished. Call me naïve—and you really should—but the constant feed of social media posts from the pair of them had me convinced.

That was all wig-snatching enough. But when the other queens piled on to dish their own doubts as to the sincerity of the match I do not lie when I tell you I got more excited than a Change UK candidate finding a voter who knows who the hell they are. Or Sam Smith when he became ‘the first gay man to win an Oscar.’ Or all of us realising that Nina West teaches kids about drag.

Everyone let me introduce you to my toes