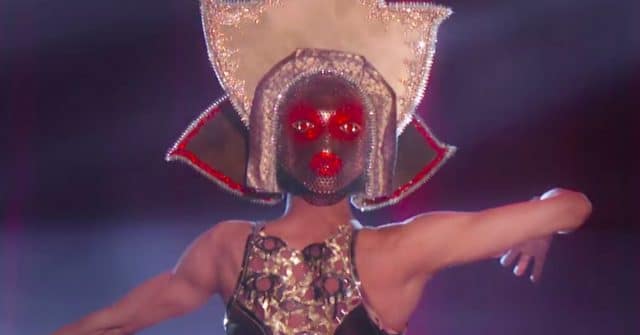 10 queens and 14 weeks after RuPaul’s Drag Race Season 11 began and only four remain.

How much Charisma, Uniqueness, Nerve and Talent was episode fourteen, the grand finale packing?

Whatever I—or any other stay-at-home Simon Cowell—think of these queens, this season, or this show, we shouldn’t lose sight of just how special Drag Race is. It’s the only stage in the world where queerness is both front and centre, and the basis, backdrop and assumed norm.

Should it be a whole lot more inclusive? Sure. But if Season 11 has taught us anything, it’s not to throw the baby Vanjie out with that bathwater Season 10 dress. And that’s the capital Tee (unlike RuPaul’s “we don’t do it for the awards” schtick which screamed lowercase s.)

I guess they were right about Yvie Oddly being two-faced. (Netflix)

But it’s also the tee that Drag Race is a silly, absolutely fallible TV show about people playing dress-up. Some seasons simply have to be worse than others, but that—obviously—in no way invalidates the franchise. Which is lucky, because we spent this season being edged, only without much glory.

We waited weeks for the filler to go and the competition to come, except it never really did. The judging was oddly enough, sacrificing the eleven-gendary jewels of Nina West and Miss Vanjie in favour of an Yvie/Silky rivalry, but then Silky refused to let even that come to a satisfying climax. Ms. Ganache, may I just say that WE WERE MOTHERF***ING READY.

We were finished off with a rematch of the (only) iconic lip sync battle of the season between Yvie and Brooke. It was gaggy, but ultimately failed to live up to its predecessor.

Re-live the most bizarre 30 seconds from Untucked below:

But thankfully our finalists saved and slayed the runway. Brooke’s REVEAL outfit was the very definition of drag, and Yvie eked every performative possibility from her body with her muscular moment, head-turning fourth face and free Britney crotch.

A shout out to Aquaria for rising from the decidedly non-camp ashes of the Met Gala like the phoenix we know she is. Definitely not her (Conchita) worst moment.

Silky fought valiantly but at this stage a reveal without a story behind it just isn’t enough. The camera clearly favoured her opponent, but it was hard to be mad about it. It was brave of Brooke to go in without any trickery or buffoonery, and she felt her oats so damn hard I just wanted to get up and join her. The night’s highlight.

I enjoyed Yvie once I understood the story she was selling, but it wasn’t clean enough. While A’keria wasn’t anything enough. It wasn’t a bad lip sync, but finale worthy?

In the words of Nina: Meh.

The rematch we all wanted/needed/fully expected would have been more epic had we not been expecting it to top “Sorry, Not Sorry.” That was a battle of the soul, but “Born This Way” was more a battle of costumes. A deserved win for Yvie, but a Sasha Velour slam-dunk it was not.

Finale rucap: I was wrong. She didn’t break out of her box on the runway, but she did prove her potential for pageant perfection. One moment of brilliance during the twerking challenge—the only A’keria flashback shown in the finale—was enough to see her through to the end. It may not have propelled her this far in a different (read: stronger) season, but with time she could prove herself a serious competitor for All Stars.

“Along the way y’all have called me loud, obnoxious, messy, unpolished, a camera hog—which I am—say what you want to say, y’all never had a dull moment when I was on the screen.”

SAY IT LOUDER FOR THE KIDS AT THE BACK.

Finale rucap: I get why Silky can grate, and if she had been taking screen time from the queens of Season 10 I would have tired of her too.

But the tee, Christine, is that we needed her this year. Silky did her level best to ensure that we had an entertaining TV show, which is more that can be said for a lot of the cast. I’m excited for her All Stars return, but she should leave it a few years. Let her reflect, polish and grow. Given time, we may even start to miss her.

Episode one prediction: all there on paper but not the winner (see: Detox), 4th place

Finale rucap: Nobody could dispute Brooke Lynn’s ascent to the upper echelons of Drag Race royalty. She could have easily taken home the Season 11 crown, and a large part of me wishes she had.

It’ll be fun to see her slay All Stars, but—unlike Yvie—I wonder how much she’ll improve with the extra drag dollar. She oozes polish like Soju oozes cysts. However, as Trinity the Tuck proved on All Stars 4, glo-ups don’t just come on the runway. If a more fun-loving, easy-going Brooke returns to our screens she could truly reach new heights.

I know I definitely wasn’t the only one who saw this coming, but I’m still going to go ahead and call myself the three-eyed—or three-headed—raven of Drag Race.

She’s the only contestant to be crowned after winning just one week (she should have won two, of course, after carrying the other four soloists—RuPaul included—on Queen’s Everywhere).

But it’s hard to begrudge Yvie her crown. She will be a powerful figurehead, an eloquent spokesperson and she owns a compelling story.

She’s the full package, and the only one who managed to pull off a genuinely shocking ruveal in the finale.

I can’t deny that I would have loved to see how her drag evolved given more time and coin, but we don’t need All Stars for that—just wait for next year’s crowning.

Yvie Oddly is on a mission to #FreeBritney. (Netflix)