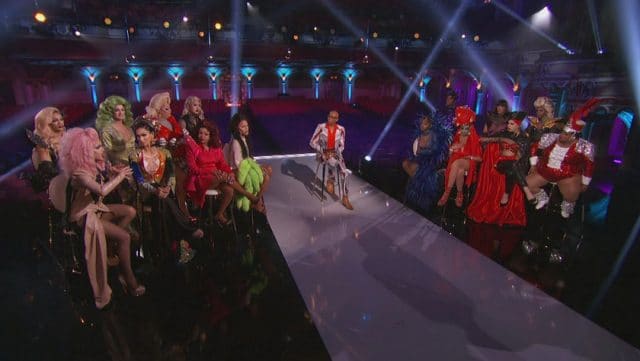 On this season of Drag Race, we’ve seen more drama than we
have of previous seasons, with Queens fighting over wigs, memes, feelings,
truth, lies, justice, catchphrases, photographs, social media, transphobia,
racism, freepasses and flat out being annoying. What will the show choose to
focus on? Will the show finally acknowledge its race problem? Will the Queens
make up?

Find out below. We’ll split it up by Queen.

Oh Soju. Why didn’t
you stay on Youtube? Soju’s screentime this episode is dedicated to her barely
being in the show. None of the drama Soju indicated she would be bringing was
shown to us at this reunion. So, that was a bit of a bust. There’s not much to
say.

Poor Kahanna attempts
the Reading Challenge with some bizarre convoluted “jokes” and
terrible delivery. Not even quite “so bad, it’s good” like her mother
Coco’s All Stars 2 reads… Kahanna also attempts some bizarre drama with
Mercedes Iman Diamond who looks bewildered. Apparently Kahanna took mortal
offence of Mercedes posting their lip sync online. Mercedes took it down on
Kahanna’s request thinking it was due to time delay, but posted it again a few
weeks later. We’re Team Mercedes here. Of course if you are in a tv show, it
makes sense to post clips of it. Opulence, you are everything. Mercedes handles
it well and just brushes it off.

Honey receives a total
one second of extra time than her entire appearance on this season bringing her
grand total up to four seconds of screentime.

Aside from the random
Kahanna drama, Mercedes talks about her family and how some of them have come
to accept drama. It’s one of the nicer moments from the show and really shows
that Mercedes deserved a lot better on the show.

We still don’t know
what Wiggate is and we still don’t care. Ariel comes off as someone who is shit
stirring behind backs but cracks when actually faced with confrontation. Her
segment is of minimal interest, though Ra’Jah hilariously tumbleweed-throws the
missing wig back to Ariel.

Scarlet’s segment
revolves around Brooke Lynn Hytes saying some rather nasty stuff at a viewing
party – namely that everyone hated Scarlet and were happy she was eliminated.
Brooke apologizes that she should have not spoken for everyone but that Scarlet
really was feeling her oats hard. We suspect Scarlet really was more annoying
in real life than the camera showed. All viewers should be aware of how the
editing can really change perspectives.

Ra’Jah is this year’s
Vixen which means she gets blamed for nearly everything and RuPaul tries to box
her into a corner for television drama. It is not pleasant to see, but Ra’Jah
handles it incredibly well when she’s basically being told she’s an evil bitch
with no heart. Ra’Jah honestly talks about how she was stressed and in her own
head and learnt a lot seeing herself on the show. Ra’Jah seems better adjusted
and we’re happy for her. There is an odd moment where Yvie cries that Ra’Jah
got personal with the insults on the cameras, despite Yvie doing so to Ra’Jah’s
face. But, we’ll get to that.

Plastique stuns in the
best outfit of the night in traditional Vietnamese attire. She perhaps has the
best run of the night, she grandly forgives her foes like Ra’Jah talking about
how she didn’t fight back with Ra’Jah because she could see how much Ra’Jah was
hurting. The issue of Plastique’s accent is addressed, but whatever the case,
it’s Plastique’s life and voice, let her live it.

This season continues
to gaslight us into wondering whether Shuga Cain actually exists at all. Zero
screentime aside from everyone making fun of her ugly Troll look (her other
amazing looks are not mentioned). Shuga’s argument moment from the promotions
is not featured in this episode. Hmm…

The show continues its
love for Nina West and there’s no drama here. Nina’s rather uncomfortable tweet
where she took an unconsented photo of a random Asian person on a plane and tagged
it as Manila and the fanning of the flames of Silky-hate by liking everything
saying she was robbed and not speaking up is a bit suspicious.

#Branjie gets a fair
bit of screentime. The shocking relevation being that Branjie has been over for
months (we been knew) and they were playing it up for the fans. Brooke doesn’t
come off well here, though not being ready to commit while your partner isn’t,
is a totally valid reason for a break-up, the whole “maybe in the future”
hang-up line doesn’t seem fair on Vanessa. To all you readers out there, you
don’t owe yourself to anyone, but don’t let people think you might in the
future and give them false hope. That’s not cool.

Surprisingly demure
today which makes us wonder whether she was putting all the extra-ness on
during the season for a top 4 free pass. She seems on good terms with Yvie, her
primarily source of contention, so the drama has sort of dried up.

Ru apparently does not
like A’keria who is portrayed as the secret potstirrer of the season. Though
A’keria had her finger in a few of the dramas, the pinning of a lot of it on
her seems a bit unfair. These girls are tired and stressed. Miscommunication
and talking without thinking runs rampant.

In a cute bathrobe
number, Yvie comes off with the best edit. RuPaul bends over backwards to
justify her behavior and actions throughout the series to the point where it’s
a little bit ridiculous. We like Yvie’s passion and honesty, but there’s a time
and place and she frequently missed the mark and further upset people who were
already upset for no real reason. It’s not cute, but the show praises it while
chewing out the other girl (whatever happened to reading is fundamental?).

Our presumed winner
comes off bad in her Vanjie relationship and with little else to counteract
that, Brooke comes off badly in the reunion. Cool hat though.

For a drama-full
season, this Reunion was light. It wasn’t the emotional-exploitation-carnival
of season 10 or the cutthroat calamity of season 9, it was just a bit eh. None
of the really big issues were properly address like Shuga’s robbery or the
show’s race issues, social media hate and so forth. But we suppose it would
undermine the show to do so.

It’s one to skip on
future viewings.