Thanks to a loophole, a pair of gay newlyweds have “accidentally” become the first same-sex couple to have their marriage legally recognized by Russia, the Moscow Times reports.

Returning home after getting married January 4 in Copenhagen, Russian citizens Eugene Wojciechowski and Pavel Stotsko took their notarized Danish registration forms to the Moscow registry office in an attempt to get the updated marriage page of their passports stamped.

The newlyweds told Russia’s Rain TV it only took five minutes for the registrar to stamp their passports “without superfluous questions and no change in his face.”

A spokesperson for the registry office later explained that the marriage was approved because there was no condition in Russia’s Family Code preventing it.

While Russia does not register same-sex marriages, Russian family law does recognize marriages registered abroad if they do not contradict article 14 of the Family Code. This article prohibits marriages involving people who have a close family relationship, who are currently married, and who have been designated mentally incapable by a court of law. Other passages imply that marriage includes a man and a woman, but article 14 does not explicitly disqualify marriages between people of the same sex.

“It turns out that it was not necessary to fight,” said the couple. “It’s a shock.” 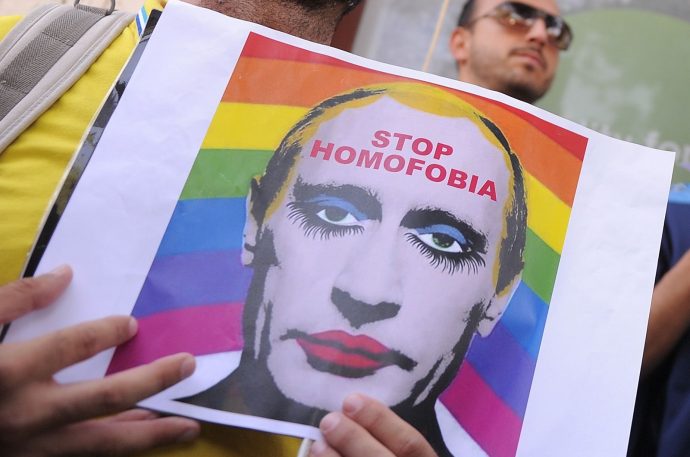 The Moscow registry office later denied registering the marriage in an online statement, writing, “Employees of state service centers don’t stamp passports. Therefore, the information indicated in the news is false.” Meanwhile, Internal Affairs Minister Vitaly Milonov stated that he is working with Russian legislature to “amend the Family Code as to which marriages can be recognized in Russia.” He added, “Somewhere in Somalia, they will begin to recognize marriages with farm animals.”

Wojciechowski and Stotsko have been together for more than six years. “We have always dreamed of a wedding so that in the face of society we will give vows to each other in devotion and love,” Stotsko writes on Facebook. “Although our love is not recognized in Russia as the norm.”

“Until we lived together, we met on the street, sneaking out in the dark alleys, hiding from strangers, friends and family,” Stotsko continues. “We were silent and patient, as everyone was silent and tolerated. But we supported each other and remained strong.”

Stotsko also denies news reports that he and his husband have since had their passports revoked, but he does believe police have made attempts to confiscate them. The couple is prepared to challenge the Ministry of Internal Affairs in court if necessary.

While homosexuality is technically legal in Russia, LGBT citizens face discrimination, harassment, and even violence. A recent Pew Research survey found that 72% of Russians believe homosexuality is morally unacceptable—more so than adultery or gambling.

The country introduced a “gay propaganda law” in 2013 that prohibits “propaganda for nontraditional sexual relationships” being disseminated to children. The law is also used to suppress public discussion of LGBT rights, displays of Pride symbols, or affection between members of the same sex. Violators of the law, which was declared illegal in June by the European Court of Human Rights, face fines of up to 500,000 rubles ($8,000).