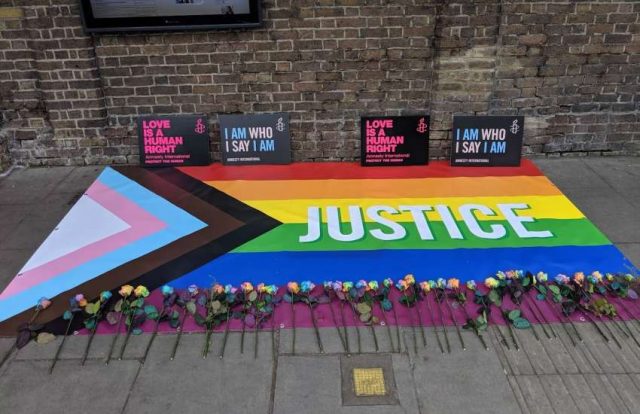 ‘We’re here to hand in some post,’ Eleanor Kennedy said into the intercom outside the Russian Embassy, London.

Kennedy, alongside dozens of placard-holding supporters, were handing a petition calling for Russian President Vladimir Putin to respond to the second purge of LGBTI people in Chechnya.

Alongside the petition, she and her team laid out a giant Pride flag on the embassy steps today (17 May) in protest against the bloc’s silence. It was done to coincide with the International Day against Homophobia, Biphobia, Intersexsim and Transphobia (IDAHOBIT).

At 10am today, dozens of LGBTI people and allies met outside the embassy and blanketed the sidewalk with a Pride flag and an array of multi-colored placards and signs. Contrasting to the cream-colored three-story building and dusky gray sky behind it. 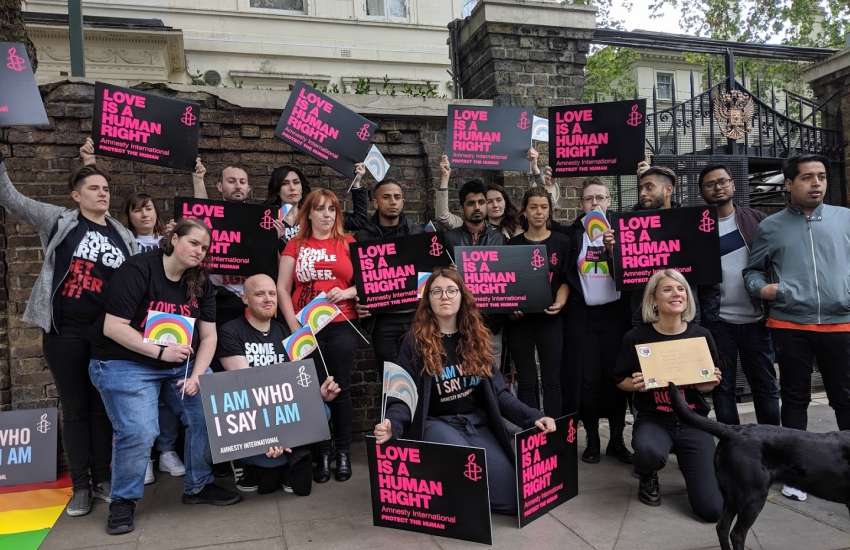 Dozens of LGBTI activists made their voices heard | Picture: Reporter’s own

The protest was a collaboration between two of the largest human rights charities, Amnesty International and Stonewall. Rainbow RU, a London-based Russian community, also joined.

The trinity of activists were there to bring to light to arguably one of the biggest human rights atrocities in the 21st century so far.

In a notorious crackdown in April 2017, more than 100 men thought to be gay were abducted, tortured – and in some cases killed – in Chechnya in what appeared to be a coordinated purge.

This wasn’t the first time that the 33-year-old individuals at risk campaigner at Amnesty International UK tried to mail a petition to the embassy.

Kennedy told Gay Star News: ‘We’re here on IDHOBIT 2019 to hand in a petition that Amnesty International have been running calling on the Russian government to take responsibility for human rights abuses that have happened against the LGBTI community in Chechnya. 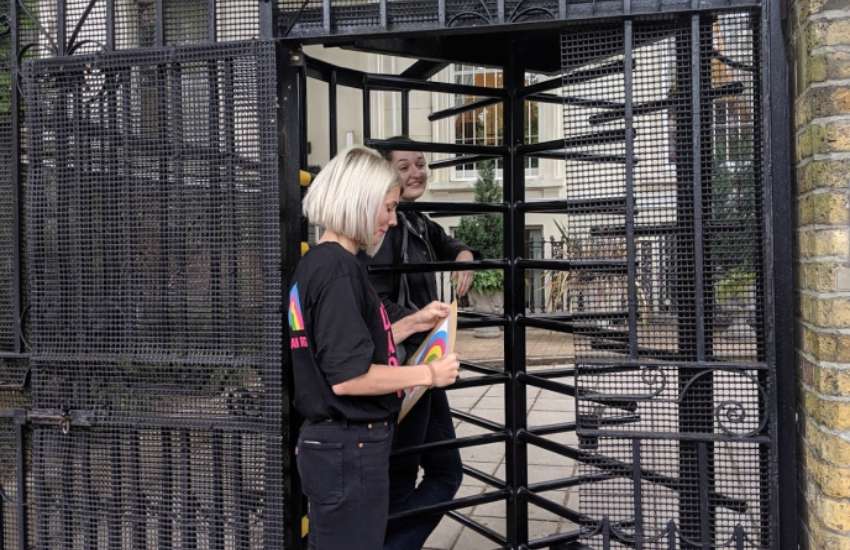 Ellie Hending attempting to hand deliver the petition to the Russian Embassy | Photo: Reporter’s own

‘The Russian government, who are the de facto leaders of Chechnya, refuse to take any responsibility for this and have refused to cooperate with international calls for a legal investigation into these atrocities.

Kennedy and a co-worker went to hand-in the petition, but embassy guards communicated that this wasn’t possible. Kennedy would have to post the petition instead. ‘We’ll post by first class,’ she said.

The 65,000-strong petition is the second Kennedy has tried to hand in. Her first coincided with the first recorded wave of attacks back in March 2017, she told me, as a can of Diet Coke was blown down the sidewalk.

‘Off the back of that, we ran an action similarly calling for the Russians to take responsibility. Tried to hand it into the embassy and they refused to engage. 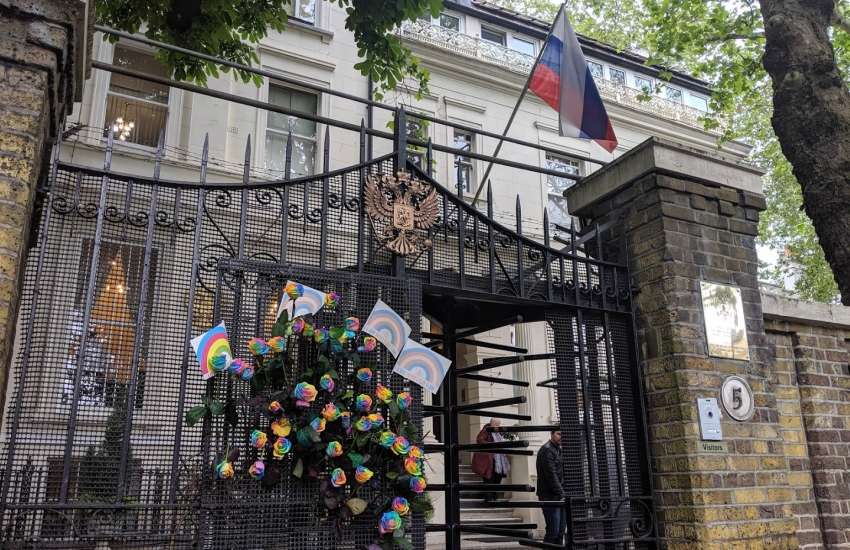 As embassy guards politely asked protesters to pack-up, some supports decorated the mesh gates with dozens of rainbow roses | Photo: Reporter’s own

‘The same thing has happened again. Just kicking the can further down the road.’

Senna, 25, said to me ‘Merry IDAHOBIT.’ The Kingston-upon-Thames local was up in Kensington for the day along with her Amnesty International colleagues.

‘I’m a bisexual myself and I find what’s happening horrible,’ she told me, standing by a residential street. ‘There are no words to describe what is happening.

‘We need to change what’s happening. What we’re doing today is raising awareness and we have more than 200,000 people behind us.’

This was a sentiment held by Leanne MacMillan, director of global programmes at Stonewall. ‘It’s incredibly important that we practise a politics of presence,’ she told me after the protest.

‘Over 65,000 people have signed this petition worldwide. We knew this was going to be for the long-haul.

‘This isn’t just an issue for the LGBTI people, this is about human rights in general. A crushing assault on human society in Russia and Eastern Europe spearheaded by Russia and other states.

‘I think the more that we can do to send a message that we’re calling for action. One of the tactics of the Russian state is to practise a politics of normalization, invisibility, and denial.

‘The best thing we can do is continue to say that we’re here, even when the actions aren’t hitting the headlines.’

Chechnya, or the Chechen Republic, is a subject of the Russian Federation located in the North Caucasus region. It has a population of 1.4 million and the capital is Grozny.

Its president is Ramzan Kadyrov, who has been in power since 2007. He tends to rule the country in accordance with traditional Islamic social codes, even if these contravene Russian law.

Since last year, LGBTI folk have been detained in makeshift prisons, strapped to homemade electric chairs, sexually assaulted with police nightsticks as the torture methods intensify.

While Russia decrminalized homosexuality during the breakup of the Soviet Union, the police in Chechnya have periodically detained queer people in extrajudicial arrests without repercussions from federal authorities.