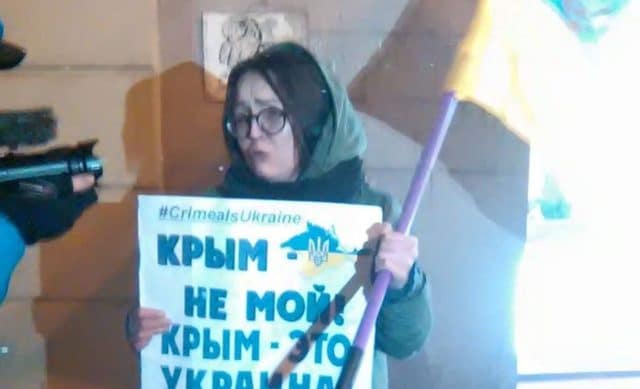 A Russian LGBTQ activist was fatally stabbed in St. Petersburg Sunday night after her name was posted on a website that encourages people to “hunt” LGBTQ activists.

Yelena Grigoryeva was reportedly stabbed by a “40-year-old resident of Bashkortostan.” The suspect has been detained by police, reports Russian newspaper Fontanka.

The 41-year-old was active with Russia’s Alliance of Heterosexuals and LGBT for Equality and other activist causes, according to the Russian LGBT Network.

Grigoryeva was worried about her safety after she discovered her name and personal information listed on the snuff website inspired by the torture-themed film “Saw.”

“I learned today that Lena asked a mutual friend to take care of her cat in the event of her death when she was threatened with murder,” friend and fellow activist Dinar Idrisov wrote on Facebook.

“The state of Russia was obliged to guarantee her the right to life,” Idrisov wrote. “Lena and her lawyer appealed to law enforcement agencies both on the fact of violence and on the fact of threats, but there was no noticeable reaction.”

On Tuesday, Idrisov updated his post to note that Grigoryeva’s mother had identified her body and that investigators in St. Petersburg had taken over the case. Other activists said on social media that Grigoryeva’s body was found near her home over the weekend with stab wounds and signs of strangulation, The Moscow Times reported.

On July 18, just days before she was killed, Grigoryeva posted an alert on her Facebook page about the “Saw” website.

Grioryeva wrote that the site, which organizes a “hunt for homosexual, bisexual and transgender people,” went online in spring 2018 and was shut down several times but always popped back up. The website posted the personal data of “presumably LGBT+” activists, “including photos and addresses,” and offered prizes to those who completed an attack.

“Law enforcement agencies have still not done anything to find the creators of this ‘game’ and bring them to justice,” Grigoryeva wrote. She called on those opposed to the website to contact the Russian prosecutor’s office and the FSB, Russia’s intelligence agency.

“IMPORTANT!” Grigoryeva wrote. “The Russian LGBT network has repeatedly tried to find people affected by the actions of this group, but failed. We did not find a single attack case directly related to this group.”

Three days after her post, Grigoryeva was found dead.

“Actually, we found out [the list] exists last spring, and since last spring, we applied to the many officials — police, prosecutors office, investigators committee and other activists — we asked to block it,” said Svetlana Zakharova, communications manager and a board member of the Russian LGBT Network.

Zakharova said the website was blocked several times but it kept reappearing, “and this summer in July there was Yelena’s name in this list.”

“They publish the information, like LGBT activists’ photos, addresses, names, and they call to hunt LGBT activist and to get a reward for that,” Zakharova said.

Asked whether the police would investigate, Zakharova said, “Unfortunately, I don’t think so, and I’m sure that even if it is a homophobic hate crime, the hate motive is not going to be taken into account.”

“We have this situation in Russia — even when you go to police to file cases, police can refuse to register the case,” Zakharova added. “Yes, people are very worried — well I would say that the fact that this website exists for so long with out any reaction from the authorities is very telling; it tells a lot about homophobia in Russians’ institutional levels.”