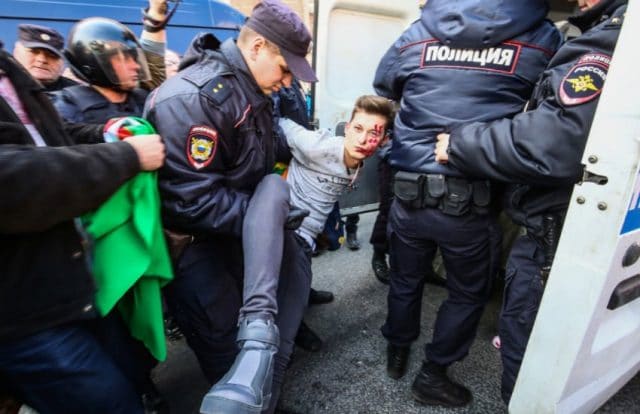 Ten protestors were arrested and dragged into police vans

Activists staged a dramatic demonstration in St Petersburg, painting their faces with fake blood and pretending to be dead on the road.

The activists also draped rainbow and Chechen flags over their bodies, reports the Independent.

A group of ten protestors were arrested near the Anichkov Palace in the centre of Russia’s second biggest city.

Russian police in full riot gear began dragging protestors into police vans, with one protestor fainting during the melee.

A separate group of protestors were detained after they held placards calling for the Chechen leader, Ramzan Kadyrov, to be tried at the International Court of Justice.

The demonstration protested against Chechen authorities arresting more than one hundred men, with reports three killed.

According to Russia’s ‘gay propaganda‘ laws, possessing a rainbow flag can provoke arrest.

The demonstration was part of an international May Day march, which protests anti-austerity measures.

Countries including Turkey, Cambodia, the Philippines and Bangladesh stormed streets to protest poor conditions and pay.
Current situation in Chechnya

The Russian LGBT Network told Gay Star News: ‘To this day, neither the Russian Investigative Committee nor the General Prosecutor’s Office reacted in any way to the reports of the criminal activities and Chechnya officials’ statements.’

The activist group is working tirelessly on the ground to support and evacuate those affected.

In addition, the group is taking pleas from Chechen citizens worried about their safety.

Svetlana Zakharova told Gay Star News they have received 50 calls from people who need urgent assistance, and have worryingly lost contact with some of them.

UPDATE: At the time of writing, it has been over seven hours since the arrests.