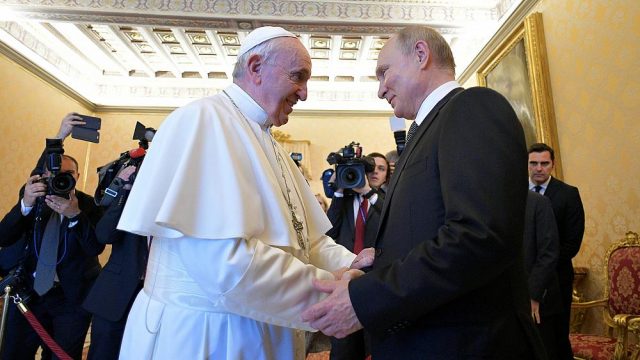 Russian President Vladimir Putin on Thursday held talks with Pope Francis and Italian political leaders during a lightning visit to the Vatican.

Putin’s meeting with the Pope — their third in total — came a day ahead of a visit by Ukrainian Catholic leaders to the Vatican in which they’re expected to talk about the crisis in their home country.

It also comes just months after Ukraine’s Orthodox Church, which had for centuries been under the control of the Russian Orthodox Church, declared its independence in one of the biggest Christian splits since the Great Schism of 1054 which resulted in the creation of the Eastern Orthodox and Catholic churches.

Russia has opposed the move, branding it more political than religious.

In an interview with Corriere Della Serra published ahead of his visit on Thursday — which some believe could be a prelude to a papal visit to Russia — Putin criticised Ukrainian authorities for “forced Ukrainiasation, bans on using the Russian language” and “attempts of the previous government to break the fragile inter-faith peace.”

He also praised the right-wing populist League Party and its leader, Interior Minister Matteo Salvini, who he said “actively support restoring full cooperation between Italy and Russia and advocate an early lifting of anti-Russian sanctions imposed by the US and the EU” and denied any interference in electoral processes in the US and EU.

“Let me emphasise: we have never interfered in the internal affairs of the European Union member states or any other states and we are not going to,” he said.

“We are interested in restoring full-fledged interaction between Russia and the EU and maintaining peace, security and stability on the continent we share. We are ready for constructive collaboration with all political forces that received a mandate from European voters,” he added.