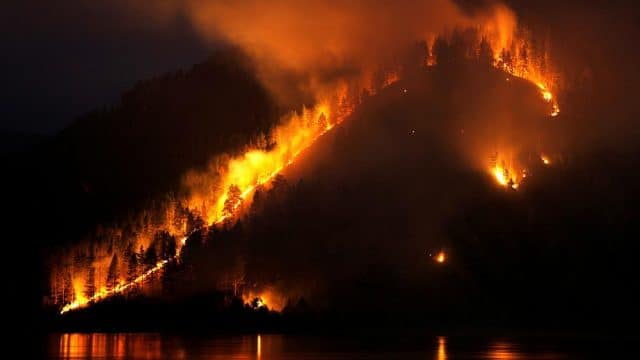 President Vladimir Putin has ordered the Russian army to take part in fire-fighting efforts in Siberia as environmentalists describe the blazes raging across the region as an ecological catastrophe.

The government claims the fires pose no danger to communities, but people are starting to suffer from the effects of smoke.

A series of enormous wildfires have spread across Russia’s eastern region of Siberia, prompting states of emergency to be declared and sparking outrage from locals who say authorities aren’t responding enough.

The fires, which have been burning for several weeks, have spread across almost 3 million hectares of land, the Federal Forestry Agency has said.

That’s an area almost the size of Belgium.

States of emergencies have been declared across five regions in response to the fires, which have burned more than a million hectares each in the worst-affected areas of the Sakha Republic and Krasnoyarsk.

But while environmental groups such as Greenpeace have described the event as an “ecological catastrophe”, Russian authorities have take a less drastic approach.

According to its latest update, Russia’s Federal Forestry Agency said authorities were working to extinguish around 107,000 hectares and would continue to monitor the situation of the further 2.8 million hectares on fire.

The vast area of monitored land does not pose “a threat to human settlements and economic facilities”, the agency said, “and the projected cost of extinguishing them exceeds the projected damage that they may cause.”

Alexander Uss, the governor of the Krasnoyarsk region, was quoted in Russian media as saying it would be “meaningless” and “perhaps even harmful” to deploy thousands of people to help extinguish the flames.

He said: “The fact is that this is a common natural phenomenon, to fight with which it is meaningless, but somewhere, perhaps even harmful.”

This slow response from Russian authorities has sparked angry backlash from local populations, who report struggling to live amid thick smoke that has spread and blanketed major surrounding cities and territories.

More than 800,000 people, at the time of writing, have signed a petition demanding a state of emergency be declared across the whole of Siberia, and that more be done to battle the flames.

It says: “Imagine what’s happening in the core of the disaster right now with forests and animals burning alive.”

“Burning down of forests results in groundwater level decrease and possible freshwater shortage.”

Pointing out that the proximity of the flames to human settlements was not the only burden, the petition added: “It has been causing respiratory difficulties for humans and animals, and endangering various species of fauna and flora.”

Aside from smoke reaching areas across Russia, neighbouring Mongolia has also expressed its concern.

Purevjav Soronzonbold, a senior officer at the Firefighting Department of the Mongolian National Emergency Management Agency, was quoted in reports as saying it had been “seriously watching” the outcome of the blaze.

Meanwhile, social media users living in cities affected by the smoke have been posting content demonstrating the poor visibility and discussing their difficulties with breathing.

One Nizhnevartovsk-based user said the smoke was “simply trouble”, but added that she was for the moment “fine”.

She said: “Our small town is in the ring and the embrace of swamps, taiga, lakes and rivers. This smog came from Krasnoyarsk. At the moment we are fine. But this is temporary. Save our land!”

Another user said the smoke was causing “a nightmare”. Captioning her pictures, she pointed out: “You can’t even see the bridge, the roads and the cars.”

Several users based in Irkutsk also posted content, with one describing the scene as “an abyss” that had “descended from the sky”, adding that it had “become hard to breathe”.

The first round came after a cyclone hit the region’s south in June, bringing torrential rain that burst river banks and inundated local settlements.

On Wednesday, the Russian emergencies ministry said a further 25 settlements had been flooded, adding to the more than a hundred settlements flooded in June.