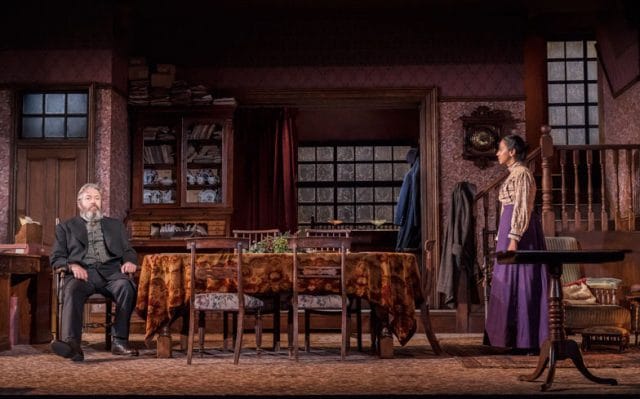 Set in a northern industrial town, this play tells the story of John Rutherford, a capitalist and glass-making business owner who rules the roost in both his factory and the family home. He is disappointed in his Harrow-educated son John Jnr, who initially turned his back on the family business to pursue a new life in London, only to return some years later with a working-class wife and young child he couldn’t afford to support. Also under Rutherford’s command in the household are his sister Mary and his other children Richard and Janet.

It’s an interesting and intelligent exploration of family, class and generational warfare. Roger Allam is a commanding presence as the tyrannical Rutherford, who tries to trick his son John Jnr (the terrific Sam Troughton) into revealing a secret formula he’s been working on as a means to save the ailing business. Rutherford finds a variety of bullying tactics to exert his authority over those under his control, whether that’s barely acknowledging his daughter-in-law Mary or questioning the validity of his son Richard’s chosen profession.

The play presents a smart observation of a generational divide – between the more conservative and traditional values of the Victorian father and his liberal Edwardian children. Over the course of the play we see each of Rutherford’s children gradually turn against him, looking for his or her own way out. They each present a deal in their own way; these are interesting to observe, as Rutherford considers himself a powerful businessman and shrewd negotiator – the tension in these situations is often gripping.

We had two very minor reservations with this production. The choral singers – three either side of the stage – who popped up at the start, during the interval and again later in the second act – were a bit baffling. We’re all for engaging theatre and an immersive experience, but singing meandering arrangements about “the north” didn’t really do anything for us. The acts seemed imbalanced, too – this traditionally three-act play has been compressed into two, resulting in a first half which feels short and ends too abruptly, while the second seems over-long in comparison.

We were otherwise very impressed with Rutherford and Son. The quality of the acting was superb – alongside Roger Allam and Sam Troughton, we thought both Anjana Vasan as Mary and Justine Mitchell as Anne were excellent, and there wasn’t a weak link in the cast. It told a clever and gripping story which sustained our interest throughout, even during a lengthy and often challenging second act. A worthy revival of Githa Sowerby’s powerful play.