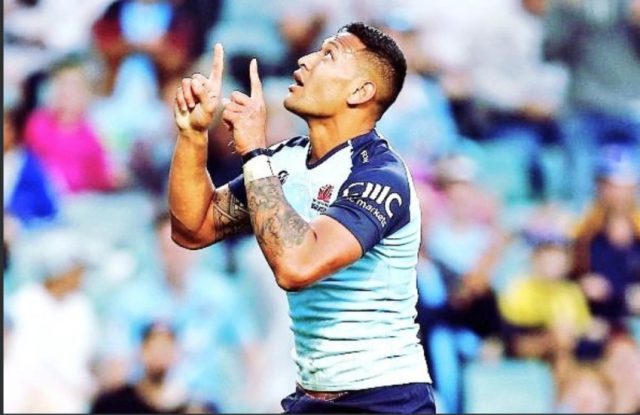 The dad of a rugby player fired for homophobic social media posts told him not to delete them. Even though it might save his career.

. He had taken to social media to warn ‘hell awaited’ homosexuals unless they repented for their sins. He also criticized new state laws in Tasmania which removed gender from birth certificates.

Sensing his career might be in danger, Folau almost deleted the most recent controversial posts until he spoke to his father.

According to the , Folau called his dad, Eni Folau. Eni, a Christian pastor told his son to keep the social media posts.

Eni warned Folau, ‘you’ll go to hell, son’ if he took the posts down.

‘Had he taken that step, and shown contrition, Folau would have been impossible to sack,’ the Telegraph reported.

‘Eni told his son that if he pulled down that post, Folau would be disowning the words of the Lord, a sacrilege that would send him to hell.’

The report suggested if Folau had quoted the Bible rather than post a meme, it would’ve been a lot harder to fire him.

‘Everyone has missed the key here, have a look at the post, it says “Warning” and “Hell”, but the Bible verse does not mention either word,’ a source told The Daily Telegraph.

‘Izzy was getting told he’d go to hell if he took down the post, but if he had removed that image and re-posted word for word what the verse says, they couldn’t have sacked him.’