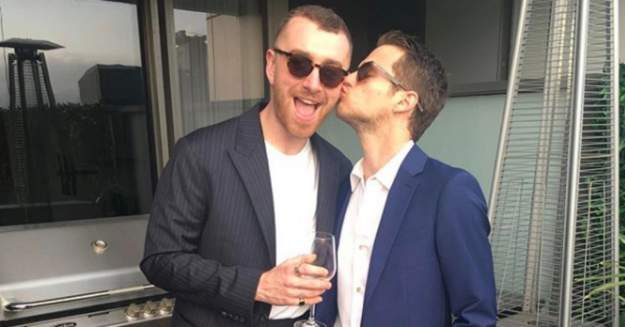 British singing sensation Sam Smith and his adorable actor boyfriend Brandon Flynn are definitely the talk of the gay town, and their A-list relationship has garnered a surprising amount of interest from the paparazzi. For as much as I want to see Bella Hadid’s pita pocket as she gets out of a car or Justin Bieber’s nude pics (um, actually I do want to see those) I’m glad that the paps are spending their time capturing the adorable gay romance between Sam and Brandon! Or as the mainstream tabloids need to coin them – Bam. Or, Srandon. Or, neither.

Yesterday the delish dynamic duo were caught out and about in Los Angeles while walking their adorable little doggie. Just last month we saw some pics of the fellas swapping spit in public, and from the expressions of pure bliss on their faces in that frame-worthy moment, it seems safe to say that their romance is still as hot and heavy as ever. Today’s pics show a more subdued side to their relationship, but both fellas are still looking insanely fine, and while they aren’t bruising each other’s brains with their tongues, they are still holding hands in every single one of the pics. So cute!

Smith and Flynn began dating this past December, and hopefully will continue to bring the much-needed gayness to the paps for years to come. No offense, Bella and your box. These pics of Smith and Flynn walking their pooch are premium emerald exclusive plus, so you’ll need to hit the link below to check them out!