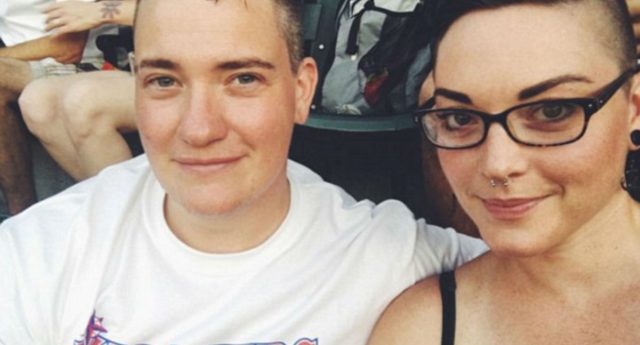 Mary McHale and Sara Hinton were threatened by staff for showing their love for each other.

A baseball team was forced to apologise to a transmasculine couple after they were criticised by staff for kissing at the team’s first ever Pride night.

Mary McHale and partner Sara Hinton – who identify as non-binary – had enjoyed the Seattle Mariners game against the Milwaukee Brewers, kissing as they waited to be picked up outside the Safeco Field stadium. However, the celebrations quickly stopped after a steward told the pair to stop kissing as it was a “family-friendly” event.

“My sweetheart looked at me and said what a great time we were having, and we kissed,” McHale told local news website KUOW.

“And just standing there, not doing anything obscene or anything that would make any of the other folks around us uncomfortable, and that’s when a Safeco Field employee came out and said ‘Ladies, I’m gonna have to ask you to stop’.

McHale said the situation was even more shocking because it was Pride night, when the city’s LGBT community was being welcomed by the Mariners.

“He said that our behaviour was against a ‘family-friendly policy’, and that point I started to get really angry,” McHale added.

Following the incident, Mariners spokesman Rebecca Hale said the employee had been disciplined as a result of his interaction with the pair and the Mariners have issued a public apology. The Mariners say they will be putting on a special training course next month for all 1,300 employees on making the ballpark more welcoming to all, regardless of sexual orientation or gender identity.

McHale thanked the Mariners for their swift response, adding: “It’s an opportunity to educate this employee and their supervisor and whoever else trains them on how to be more sensitive when they’re enforcing their so-called ‘family-friendly policy’.”

During San Francisco Pride, a gay couple was kicked out of an Uber for kissing, which offended the driver.

Last month, hundreds of protesters staged a ‘kiss-in’ in London store after a couple said they were warned about “immoral” behaviour as they held hands in the shop.