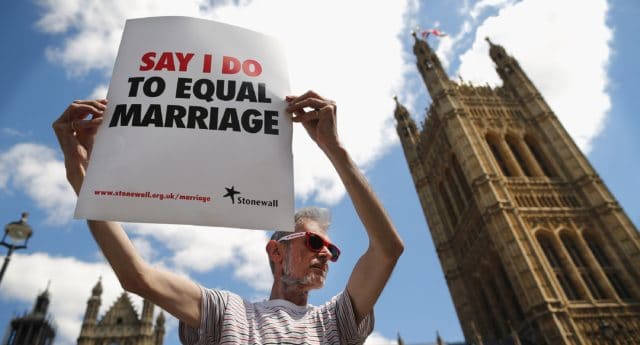 Barely any same-sex couples are opting for religious wedding ceremonies in England and Wales, data has revealed. 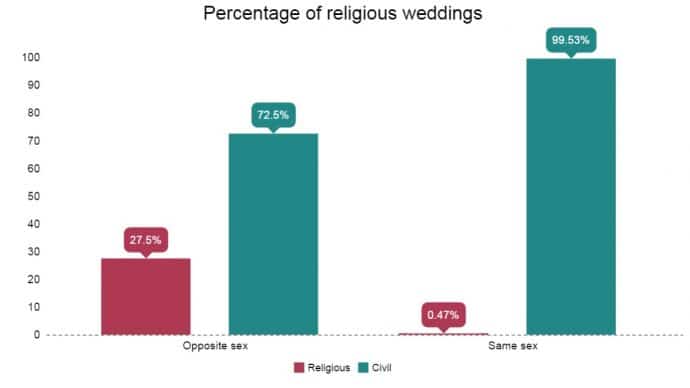 By comparison, religious ceremonies made up 28 percent of weddings for opposite-sex couples.

The news is unsurprising given that all of the largest religious groups in the UK ban same-sex weddings, including the official bodies for Catholicism, Islam and Orthodox Judaism.

The Church of England is legally banned from conducting same-sex weddings under explicit provisions in the Marriage (Same Sex Couples) Act.

Unitarians, Quakers, Reform Judaism and Liberal Judaism are some of the religious bodies who do invite same-sex couples to marry in their places of worship.

This statistic is reflected in which days of the week same-sex couples chose to have their weddings on.

Sunday, a day which is favoured for weddings in certain religions, was the least popular day for same-sex marriages.

He said that the option “would be particularly valued by same-sex couples, who at present overwhelmingly feel they have no choice of type of marriage at all.”

Humanist weddings are permitted in Scotland, but in England and Wales only approved faith groups can carry out non-civil ceremonies.