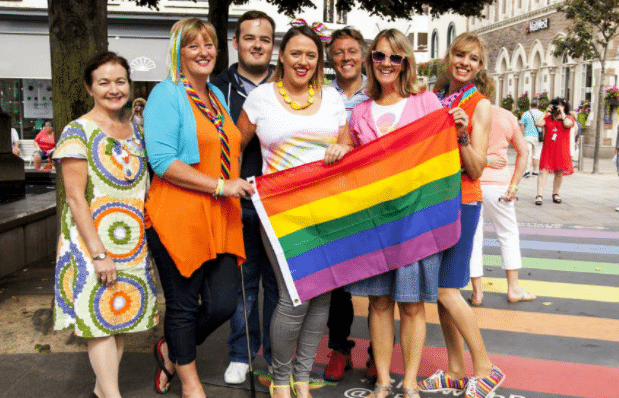 Located near the coast of Normandy, Jersey is the largest of the Channel Islands between England and France. It is a Crown dependency and self-governing parlimentary democracy. While not part of the United Kingdom, the UK is responsible for both Jersey’s external relations (like with the EU) and defense.

What is a humanist marriage?

Humanism is a philosophical practice that places the importance and agency of humans above that of the divine.

Humanist weddings are non-religious, deeply personal and specifically tailored to those getting married. They are different from civil unions, in that they reflect humanist values. Many humanist celebrants also officiate same-sex marriages.

The organization Humanists UK led the campaign to include humanist wedings with same-sex marriage, which many see as a victory.

‘The changes that allow same-sex marriage have always been the most significant aspect of this legislation,’ acknowledged Louise Doublet, Deputy of St Saviour No 2. ‘But as a bonus, Jersey is also now ahead of England in offering marriage equality to those with non-religious beliefs such as humanism.

‘I am expecting to see a surge in numbers of humanist weddings on the island, and am hopeful that local businesses will benefit as couples will be keen to travel from England and elsewhere to have a legally-recognised wedding performed by a Humanist UK celebrant. I cannot think of a better setting than our beautiful island.’

Scotland recognized humanist weddings in 2005. The Republic of Ireland followed suit in 2012.

Humanists UK Chief Executive Andrew Copson added: ‘We look forward to marrying many happy couples in the months and years to come.’