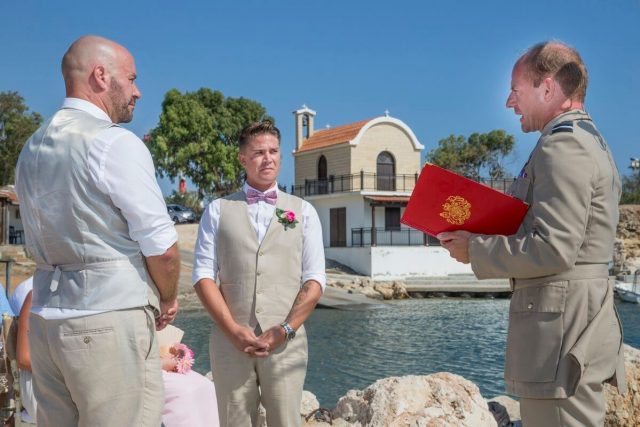 An army sergeant and his partner have become the first gay couple to marry on a British military base overseas. It is the first ever same-sex marriage to take place on a UK army base, and the first at a base overseas.

The couple’s wedding took place on September 10th alongside the picturesque coastline of Fisherman’s Cove.

The ceremony was approved and officiated by Air Vice Marshal Mike Winston – the commander and administrator of the Army’s sovereign base area.

Smith previously wrote on a blog that he feared coming out would destroy his career and was afraid to open up for a long time.

However, when he finally made the move he found he was fully supported by his battalion – the 2nd Battalion The Princess of Wales’s Royal Regiment. Speaking about the ceremony, Sergeant Smith said: “As well as having the great honour of being able to serve in an Infantry Battalion in the British Army, it’s also an honour to be able to commit myself to my husband with the full backing and support of the British Army in the unique environment that Cyprus offers.”

“In a country that is pushing forward on matters of gender and equality, both Cyprus and the SBAA have been massively supportive. We are proud to be able to serve and live in this community.”

Sgt Smith’s commanding officer, Lieutenant Colonel Chris Davies, said: “I am delighted that Sergeant Smith and Aaron were able to get married on the Dhekelia coastline – a cracking choice. On behalf of the Battalion and wider ‘Tigers’ community, we wish them the very best of happiness for the future.”

Private Liam Gibson, who works for Sgt Smith, said: “Everybody wants to be with the person they love, regardless of gender and I’m over the moon to be a part of the wedding of two good friends of mine.”