Home Gay Stars San Francisco lights up City Hall in tribute to creator of The... 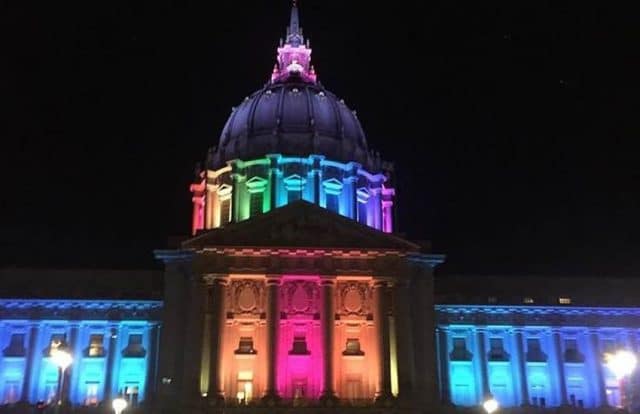 San Francisco has paid a colorful and powerful tribute to Gilbert Baker, creator of The Rainbow Flag who died last week.

In a stunning display, the lights of City Hall were transformed to match those of the iconic flag Baker created more than 40 years ago.

The flag has become the symbol of the modern LGBTI movement. The first Rainbow Flag made its public debut in 1978 at San Francisco Pride.

Each stripe on the original eight-color flag had a meaning starting with hot pink which represented sexuality. Red represented life, orange was healing, yellow for sunlight, green for nature, turquoise for magic and art, blue for serenity and harmony and violet for spirit.

Baker credits his friend, the late Harvey Milk, for inspiring his work.

Milk asked Baker to create something that would take the place of the pink triangle used by the Nazis to identify homosexuals and Baker knew it had to be a flag.

He applied this sewing skills to making banners for gay and anti-war street protest marches whenever asked by Milk, the San Francisco City Supervisor who was murdered with Mayor George Moscone on Nov 27, 1978.

In 1994, Baker created a mile-long rainbow flag carried by 5,000 people when New York City was remembering the 25th anniversary of the Stonewall Riot.

Then in early in 2008, Baker returned to San Francisco to recreate the 1970s-era banners and flags for the feature film Milk starring Sean Penn.